You may remember that I made hamantaschen last year around Purim, and that I used a dough recipe from The Jewish American Cookbook – but got a little crazy with the filling. This year, I stuck with the dough, and kept the filling traditional too: poppy seed. 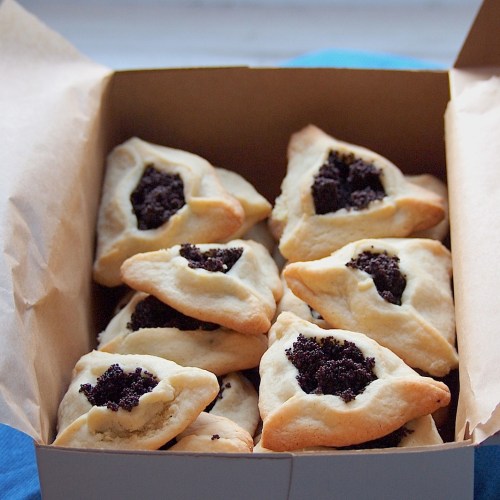 I’ve noticed in talking with friends that most people, as kids, seem to have at least one food which is classically hated by children but which they love against all odds and expectations – broccoli, chopped liver, or something else usually billed as “gross.” I adored poppy seed hamantaschen. Not quite gross, but definitely on the weird end of things, from a kid perspective. 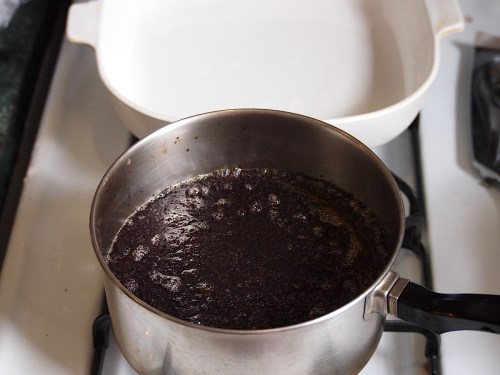 The poppy filling recipe I used was very simple – soak the seeds in boiling water, and cook them with sweetener. My cookbook offered variations; I went for one with raisins. You know I have trouble keeping things low-key. The poppy-raisin filling, as you can see above, is still really all about the poppy seeds; the raisins are broken down in a food processor, so they really just add a little depth of flavor, rather than changing the texture of the filling. I was supposed to add lemon zest along with the raisins to balance that flavor…but I was too lazy to go down to the bodega and get a lemon, so I used opted for what I had on hand: rum. 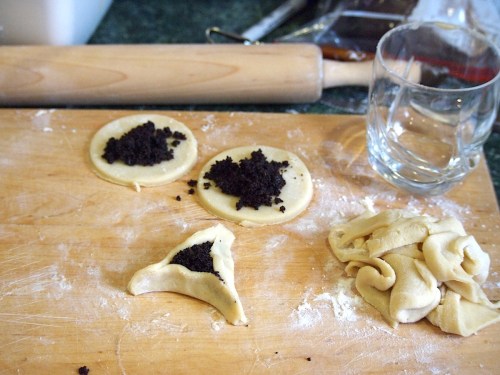 I substituted the rum where my recipe called for water, and it worked quite nicely. I had to cook the filling forever to boil off extra liquid, but it eventually reached a nice consistency where I could mound it in the middle of my rolled-out cookie dough circles. It was also pretty delicious; I ate about a quarter cup plain. I keep thinking about that Seinfeld episode where Elaine tested positive for opium after eating a poppy seed muffin – good thing my job doesn’t do random drug tests because I’m sure my results would be Samuel Coleridge-esque. This won’t end anytime soon, either: I have a ton of leftover poppy filling. I stored it in a pint jar, and am currently contemplating various uses – kolaches, perhaps? 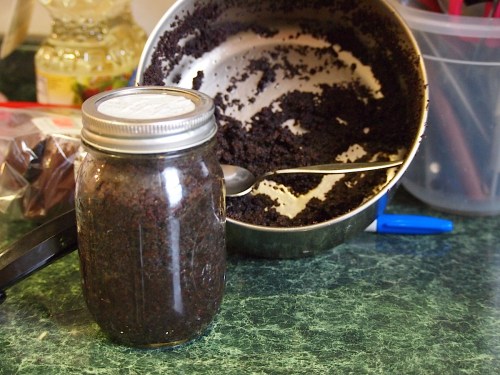 1. Pour the boiling water over the poppy seeds. Stir with a chopstick and let sit for about 10 minutes.
2. Puree the raisins in a food processor with the rum.
3. Combine all ingredients except the egg in a medium saucepan and cook over low heat until thickened. Remove from heat, let cool, add the egg, and use as desired.