I am single-handedly trying to bring the term “teacake” back into use. It is just such a perfect descriptor for a small pastry that is too cake-like to be a muffin, and is not iced or fluffy enough to be a cupcake. Like the jam-filled cakes below – which really would actually be perfect with tea. 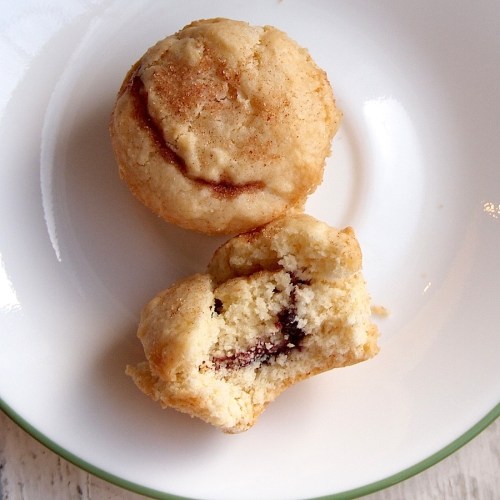 These cakelets were actually supposed to be pumpkin, not jammy. I found a can of pumpkin which had been sitting in my pantry for about a year, and decided it was about time it got used. Sadly, I already had the butter and sugar creamed when I opened the can and decided it looked a little funky. I did not start out with a Plan B, but it’s not tough to find something else to do with creamed butter and sugar, so I flipped through my Shaker Cookbook and found another recipe with similar proportions. This one was for a plain butter cake dubbed “Poor Man’s Cake.” In looking through, I passed a recipe for jam-filled muffins and I decided to make my Poor Man’s Teacakes a little richer by sticking mixed berry jam in the middle.

1. Preheat the oven to 375 degrees and grease a 24-cup mini muffin pan.
2. Cream the butter and 1/2 cup of sugar until light and fluffy. Add the egg, milk, and extract, and blend until smooth.
3. Whisk the flour and baking powder together in a medium bowl and add to the butter mixture in three round, beating on low speed between each addition.
4. For jam-filled cakes: Fill each muffin cup halfway, press your thumb in the middle of each to form a well, drop a half teaspoon of jam in the middle, and top with a heaping tablespoon of batter (as shown below). If you don’t want to use jam, omit these steps and simply fill the muffin cups two-thirds of the way.
5. Bake for 10 minutes; while the cakes are baking, mix the cinnamon with the last tablespoon of sugar. Remove the cakes from the oven after 10 minutes, sprinkle them with cinnamon sugar, and put them back in for another 10 minutes, until they are golden around the edges and a tester comes out clean. 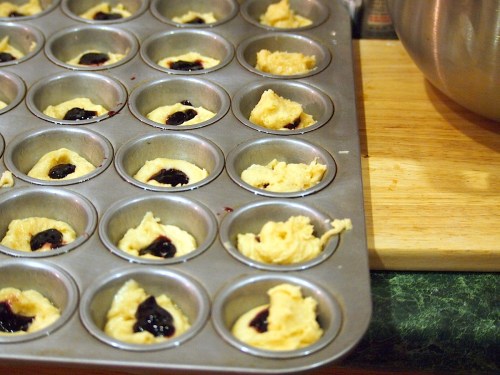