Over Presidents’ Day weekend, I took a trip to Durham, North Carolina for an ad hoc reunion with my freshman year roommates (two of whom are currently grad students at Duke).  It was a wonderful weekend, aside from two hitches: (1) I got totally screwed by Delta on my return flight, and (2) Durham’s famous chicken & waffles joint was utterly packed all weekend and I missed out on sweet-savory goodness.  By the end of the weekend I was craving chicken & waffles so badly that when I got home I decided, like a good little Brooklynite, to DIY. 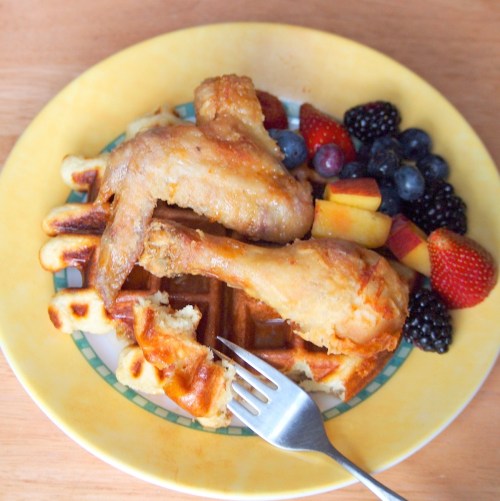 The best thing about this project: it finally got me to get off my butt and buy a Dutch oven. I’d kind of been waiting around for Prince Charming and a LeCreuset-filled registry…and then debating whether to just buy a Le Creuset myself. On a friend’s recommendation, though, I decided to stick with an affordable, sturdy enameled cast iron Lodge pan – $50 at Target. I’m really happy with my purchase; it held just the right amount of chicken and oil, and conducted heat well. And my candy thermometer got a lovely grease bath. I had wanted to use lard, but didn’t have time to go to the supermarket in my ‘hood that carries it; so, I used a mix of peanut and vegetable oil.

I started out with a fried chicken recipe from The Southern Cook Book – simple, classic, with salt and pepper as the only seasonings. Once I started cooking, though, I realized that this recipe was lacking certain useful things…like cooking times. So, I filled in some of the gaps with the first source that popped to mind: Paula Deen. 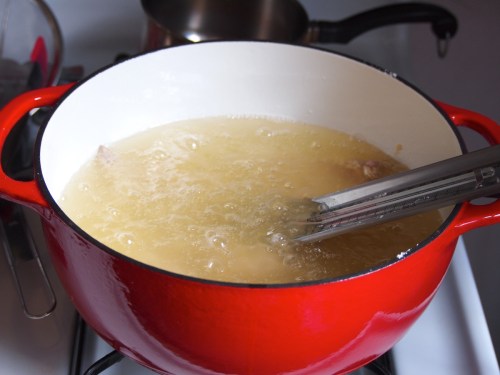 The waffle recipe came from Craig Claiborne – I found one in Out of Kentucky Kitchens called “Perfection Waffles,” but I’d been working all weekend and was too stressed out to use anything but a super-trusted source. Craig’s waffles were good – crisp on the outside, yielding on the inside. They were a bit firmer than I usually like, though; next time I’ll try for perfection with Perfection Waffles. I do kind of love, though, that the Claiborne recipe calls for melted shortening, which would never fly these days.

Sadly, haste and stress also kept me from trying the recipe I found for Spiced Honey-Maple Syrup (also from Out of Kentucky Kitchens, which notes that the recipe is “Colonial”); I realized at the very last second that I’d forgotten to buy honey. The dish pictured above is drenched in plain old maple syrup, but I’m giving the spiced syrup recipe below, since I can tell even without having tried it that it’ll be a winner. I fully intent to try the spiced syrup in the future, though – I purposely kept my chicken seasoning plain to avoid clashing with the syrup. 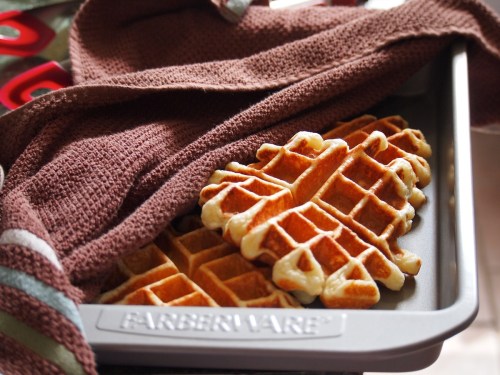 1. Season the chicken pieces with salt and pepper, place them in a large bowl, and pour the buttermilk over. Let the chicken marinate for about an hour at room temperature.
2. Whisk the egg and milk together and season with salt and pepper. Place the flour in a wide-mouthed bowl.
3. Drain the buttermilk off the chicken and pat the pieces dry. Dip each piece of chicken in the egg mixture, then dredge it thoroughly with flour. Set the battered pieces aside on a platter.
4. Heat about 32 ounces of lard, peanut oil, or vegetable oil to 270 degrees in a deep fryer or in a Dutch oven on the stovetop.
5. Roll each piece of chicken once more in flour, and slide it gently into the hot grease. Cook the dark meat pieces together until golden brown – about 8-10 minutes – and the white meat pieces together for about 12 minutes. Drain the cooked chicken on paper towels and serve hot.

1. Whisk the flour, baking powder, salt, and sugar together in a medium bowl.
2. Beat the egg whites until stiff but not dry.
3. Beat the yolks, milk, and vegetable oil together, and stir into the flour mixture. Fold the egg whites in.
4. Cook according to your waffle-maker’s directions and serve hot. To keep the waffles warm before serving, place them in the oven, on very low heat, in a baking pan covered with a damp dishtowel.

Mix all ingredients in a saucepan and bring to a boil over medium-high heat. Remove from heat and serve while still hot in a sauceboat. Recommended serving method: place a pat of room-temperature butter on your pancakes or waffles and pour hot syrup over to melt it.