Confession time: I’ve been a bum about posting this week. Warning time: it might happen again this summer as I get closer and closer to the July 26 (eek!) bar exam. And then it might happen more afterwards, as I crash on a beach in Rockport, and then trek around Southeast Asia for three weeks. I’m pretty stoked about all of the post-exam bits, though, and will try to share as much as possible up here.

Before I dive into future travels, though, I’m harking back to a former jaunt I’ve already spoken about, and putting up a lovely Greek recipe for your enjoyment. I give you…Stuffed Eggplant! 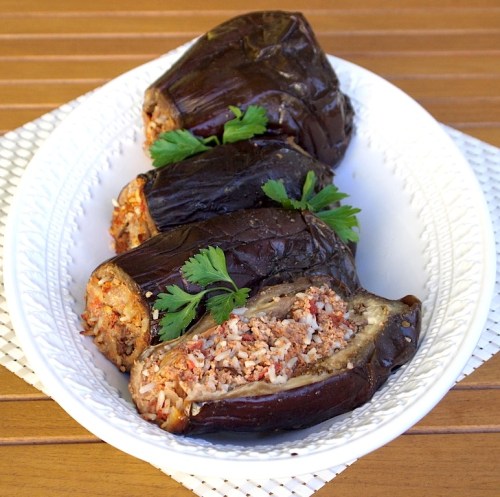 Not too summery, I know.  It was pretty cold and rainy here last week, though, so I seized the chance to make a nice, warming comfort dish with my favorite vegetable. 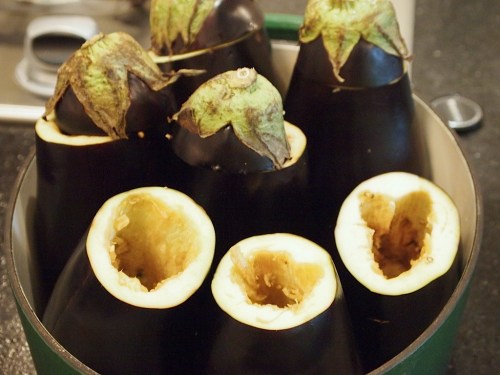 A lot of Greek cooking is very simple: it focuses on fresh ingredients and often just uses lemon juice or a single herb for flavoring – one of my favorite Greek dining experiences, for example, involved fresh-from-the-sea octopus seasoned only with salt and pepper and grilled to perfection.  Served on its own – one big ‘ol tentacle accompanied only by a wedge of lemon.  But I digress.  This particular recipe caught my eye because of its difference – because, as the author of The Complete Greek Cookbook notes, it’s got a Byzantine twist to it.  The commingling of Greek and Middle Eastern flavors shows up here in the use of nuts, raisins, spices, and wine. 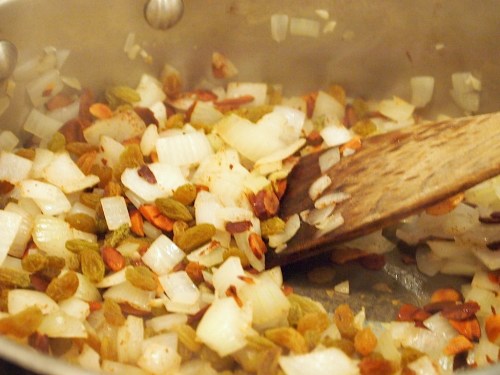 The filling – of spiced ground meat and rice – is spooned into the eggplants.  I decided to be adventurous here and use baby eggplants which I cooked stood upright.  Usually, I’d take a normal large eggplant and split it in half to make “boats.” 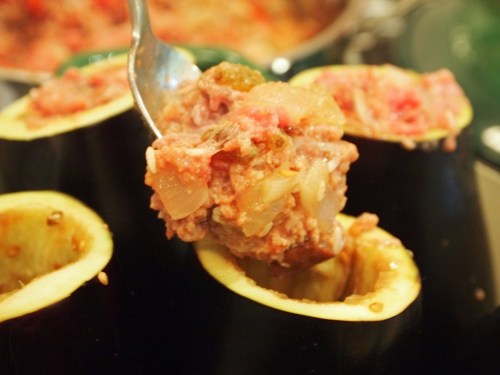 Cheese topping adds a little extra flavor to the eggplants.  The one downside of the upright eggplant method: less surface area for cheese. 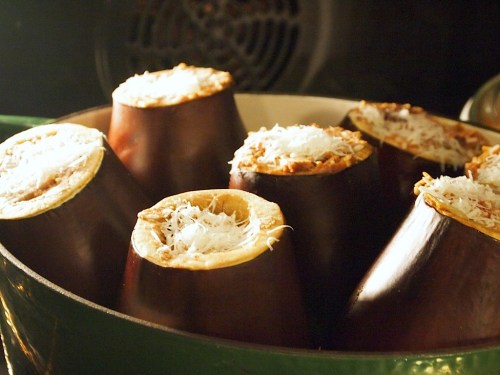 They still came out very well, though.  This batch caused me some anxiety: the whole eggplants took a lot longer to cook through than boats normally do, and dinner was…rather late.  When it finally arrived, though, it was steaming hot, and perfect for a dreary day. 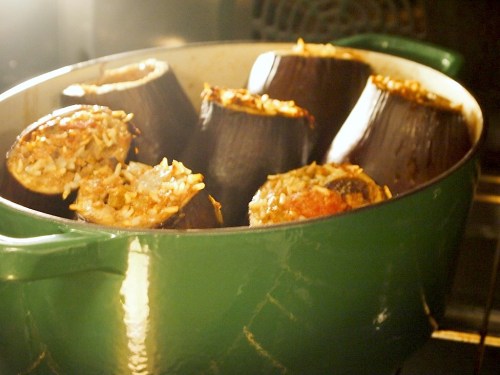 1. Preheat the oven to 375 degrees. Toast the nuts on a baking sheet in the heated oven until golden.
2. If using large eggplants, split them lengthwise. Hollow the eggplants (of either size) out so 1/2 an inch of flesh is left. A melon baller works well to get at the middle of small eggplants. Place them upright (for small ones) or on their sides (for large) in a baking dish or casserole.
3. Heat the oil over a medium flame in a large skillet and add the garlic and onion. Sautee until the onion is translucent, about 4 minutes. Add the rest of the ingredients (meat, tomatoes, rice, spices, currants, wine, and nuts). Cook for about ten minutes. There should be a little liquid left at the end; if the mixture gets dry while cooking, add more crushed tomatoes or tomato juice.
4. Put the filling in the eggplants, cover the baking dish with aluminum foil, and bake for about 50 minutes (for eggplant boats) or 1 hour 30 minutes (for small whole eggplants), until the rice inside is cooked through. Remove the foil cover, top the eggplants with grated cheese, and broil for 5-10 minutes to get a nice crisp topping. Serve as an appetizer, main, or side – however you like!