Last month I started down a Louisiana-centric path for my first Charcutepalooza sausage challenge, with a Creole Chicken Sausage. This only whet my appetite, however, for a recipe I’d been eying for a while in Michael Ruhlman’s Charcuterie: Smoked Andouille Sausage. So, for this month’s stuffing challenge, I pulled out all the stops, dove back into pork with a vengeance, and lived the andouille dream. I even got some shrimp ‘n grits into the picture. 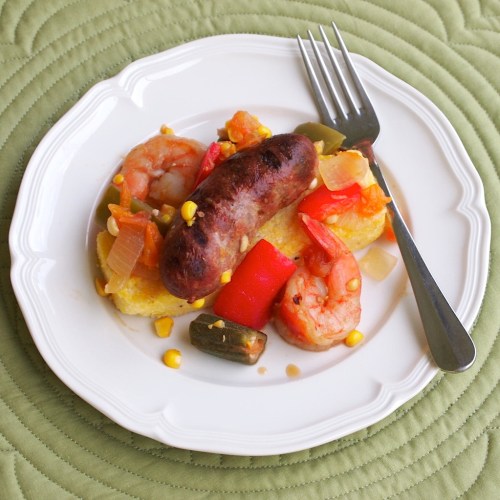 Because I’m a good Charcutepaloozian, I’m obeying the Rulhs and refraining from sharing the full sausage recipe. I was even too lazy to take photos. I mean, really, who wants to look at a whole page of raw meat? So…I made a video.

As for the shimp ‘n grits…For the grits, I used a recipe I already posted on here a while ago. I made some cheesy grits, let them set in a large loaf pan, and sliced and pan-fried them. 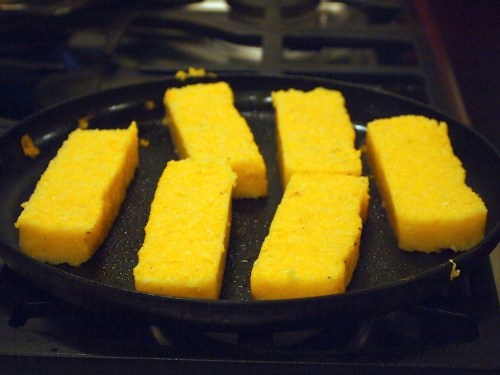 The sausage and shrimp stew had its origins in an Out of Kentucky Kitchens recipe for “Okra, Corn, and Tomato Melange.” My friend Errol has explained on a few occasions: the basic aim of any good soul food side is to turn whatever you’re eating into a meat. This melange was no exception to the rule: it calls for cooking veggies in bacon grease, and adding crunchy bacon bits in at the end. 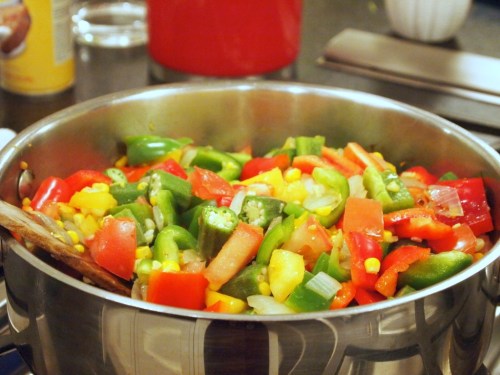 Bacon bits in veggies are on my list of Favorite Things (who cares about white dresses with blue satin sashes). I decided that I might possibly survive, though, with an alternate pork addition: I subbed sausage for bacon. The shrimp were a bonus. Mostly because I really just like saying and writing “Shrimp ‘N Grits.” 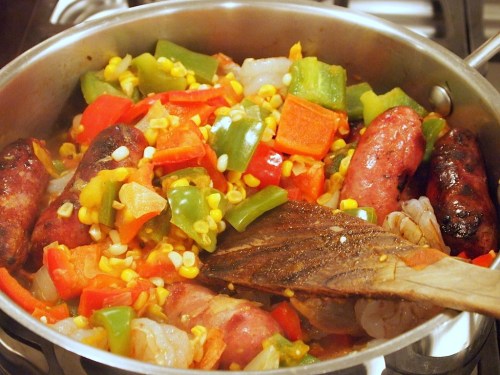 1. Heat your grill to medium. Grill the andouille, 12-15 minutes a side, until cooked through. Prepare the stew in the meantime so you can add the sausage in while hot from the grill.
2. Heat the bacon grease over a medium flame in a large saucepan and add the onion and okra. Stir and cook until the onion begins to turn translucent. Add the corn, cook for a couple of minutes, then toss in the peppers and tomatoes.
3. As the tomatoes begin to release juice and the vegetables start to soften, season with paprika, cayenne, salt, and pepper. Cook until the peppers and okra are just tender, and the liquid in the pan is starting to thicken.
4. Add the shrimp and the hot-from-the-grill sausages, and keep cooking for about 5 minutes until the shrimp cook through and turn opaque. Serve hot, over pan-fried cheese grits.

*A half recipe from Ruhlman’s book