My mom’s mother Maureen passed away last Monday afternoon. She had just turned 86, and she was my last grandparent. I both started calling my grandmother “Grandma Mo” when I was too young to say “Maureen,” and it stuck; my younger cousin grew up calling her “Mama Mo.” My Grandma Mo is not as linked with food in my memories as my Grandma Viv is; my mom’s mom was British – from Wales – and was married to an Italian. Her main signature dishes were cheesecake (already posted here) and roast beef; she was a solid meat-and-potatoes cook, except when she made Neapolitan dishes at my grandfather’s request. I will, however, always associate my grandmother with one particularly unique meal: tea. She lived on Twining’s English Breakfast, and would always have a cup in the afternoon. Often with Walker’s shortbread. So, I’ve made biscuits and a cuppa for my grandma, and am going to sit down to reminisce for a bit. I’m much better at writing about humor than I am about feelings, so bear with me… 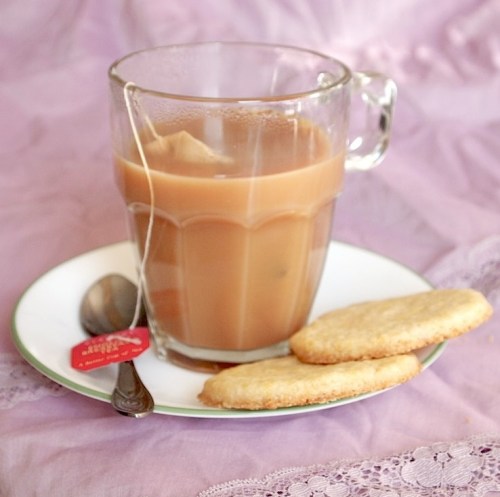 My grandmother was always a very quiet, refined person. Yet she managed, somehow, to hold her own for over half a century against a crazy, loud clan of southern Italians – despite the fact that she rarely raised her voice and always admonished me and my mother to say “dislike” in everyday usage instead of “hate.” Her strength was quiet; I take after the more vocal and forceful sides of the family, and always found it difficult to understand that kind of approach. Yet I’ve always respected it, and I’ve always found it easiest to understand in terms of my grandmother’s personal and family history.

In 9th grade, I was assigned to interview and write about a family member I respected. I still don’t remember exactly what led me to choose my grandmother, but I remember that she was rather tickled, and was quite shy in telling her story. The story she told was a classic one: she met my grandfather during World War II. She was a pretty young redhead from Cardiff, Wales; he was a dashing American GI passing through. 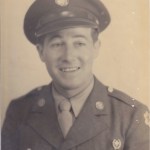 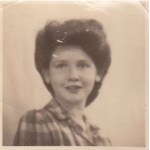 Sparks flew, he came back to visit when on leave, and they got engaged. A wedding dress was procured, family and friends saved wartime ration coupons for sugar and butter for a wedding cake, and Maureen Prendergast became Mrs. Maureen Del Gais. 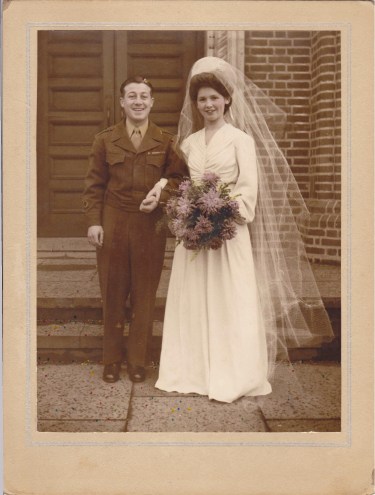 Then came the hard part; my grandmother, along with hundreds of other “war brides,” was processed through a camp on the coast and loaded onto a less-than-luxurious ship for passage to her new home in America. For my grandmother, that final destination was an apartment in the Arthur Avenue section of the Bronx. Complete with domineering Italian mother-in-law.

She survived the mother-in-law, however, and raised two children and learned to make marinara sauce and call someone an idiot in Neapolitan dialect (“chadrool”).  Despite the fact that most Italian girls from the Bronx grew up to be secretaries or housewives, she supported my mom’s desire to go to college, and then to graduate school.  Where she met my dad, a nice Jewish boy from Queens.  The result: 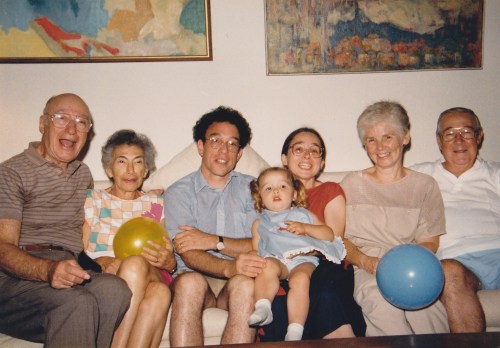 But wait; there’s still more family to get in the picture!  You see, when my grandmother came over from Wales, she left a somewhat complicated family history behind in Cardiff.  My great-grandmother Nora had a rather tragic life and, though she remained a presence in my grandmother’s childhood, Maureen was raised mostly by a foster mother – a warm, caring woman who took in several children who were not biologically hers.  Nora had a second daughter long after she had my grandmother; my grandmother knew about this child, but had no way of finding her after the chaos of the war.  Fast forward to the 1990s and the advent of the Digital Age.  My mother did some digging during trips to England and Europe.  Eventually, these yielded fruit: we got in touch with my great-aunt Sheila, and discovered a whole new branch of the family – including wonderful cousins Ginny and Martin, below. 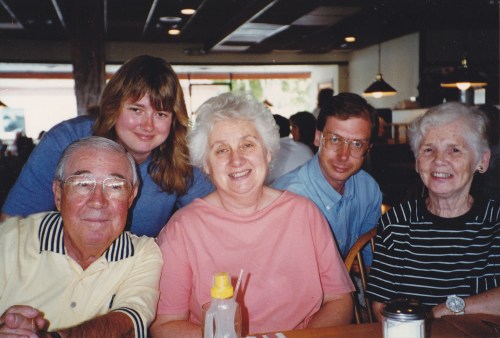 My grandmother and Sheila had a wonderful time getting reacquainted during the last decade. I’m so, so grateful that she had the opportunity to rebuild relationships, and that she spend the last years of her life at home with my aunt and uncle. Family is so essential and irreplaceable. Because of this, I often regret that I was not always able to connect more directly with my grandmother; as I said above, we just had very different personalities. I’ve set Maureen’s story out because I truly think it is an amazing one – even if she might have chided me for talking about our family life in the internet – and because I think she was a beautiful person.

I’ve mentioned before that I got most of my kitchen from my grandmother; even if she didn’t leave me a recipe box like my Grandma Viv, she is just as tied to my cooking. I don’t have a signature dish to give you here, but I do have one I know Grandma Mo would have loved: Mrs. Beeton’s sherry biscuits. 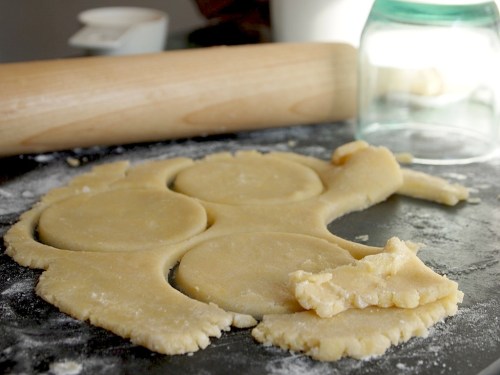 My grandmother’s tipple of choice, you see, was Harvey’s Bristol Cream. And, as I mentioned above, she loved her tea. She always drank Twinings English Breakfast, and always put milk into her mug before she added hot water. 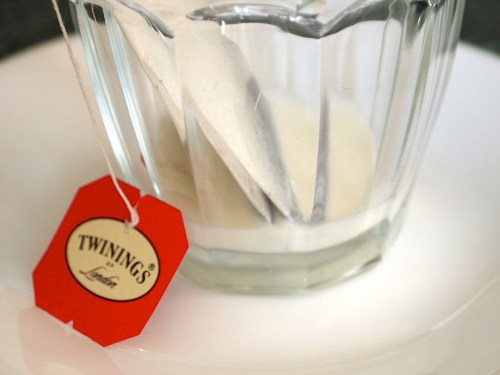 I moved without my tea collection and had to buy a new box of Twinings for this occasion; I’m happy – after this shoot I’ve still got 19 bags left for afternoon tea and warm thoughts about my Grandma Mo.

1. Preheat the oven to 350 degrees. Pulse flour, salt, and sugar a few times in a food processor to blend.
2. Cut the butter into small pieces and add it to the flour-sugar mix in the food processor. Pulse for about a minute, until blended to a texture resembling cornmeal.
3. Add the yolks and sherry and pulse a few more times. Turn the mixture out onto a clean surface and form it into a cohesive ball of dough.
4. Roll the dough out on a lightly-floured surface to 1/4-inch thickness. Cut into 2 1/2-inch rounds.
5. Place the biscuits on a parchment-covered cookie sheet and bake for 10 minutes, until the edges turn golden brown. Cool before removing from the sheet and serving.