I don’t know about you, but I can practically taste spring. I even went a little crazy last week and bought several pairs of sandals. Though maple syrup is available year-round in this day and age, the “Early Spring” section of my New England cookery book Rain, Hail, and Baked Beans tells me tree-tapping and syrup production used to be associated with this time of year – that spring signaled a switch from heavy, wintry, molasses-based sweets to the lighter flavors of maple syrup. My spring fever thus led me down the path to…Maple Gingerbread Cake. 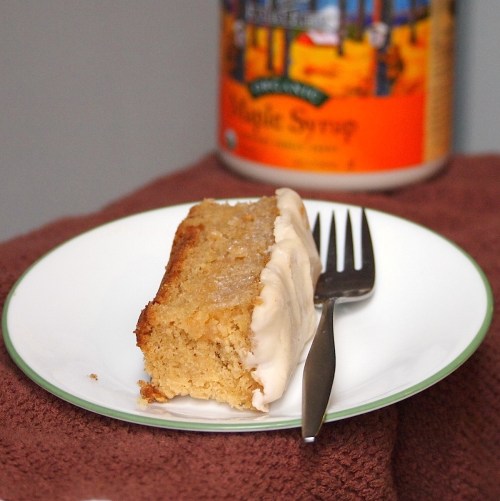 The New England focus of my spring baking came from a bout of homesickness brought on by a visit this Saturday to a Brooklyn restaurant (Littleneck, in Gowanus) that boasts delicious Ipswich-style clam rolls. Sadly, I can probably never return, since the influence of several ‘Gansett Bock tall boys and equally tipsy girlfriends prompted me to leave my number for the cute bartender/co-owner…who has not called. Tragic. Anyway, I sometimes forget how strong my connection to New England is; New York has a similar climate and people here don’t say hello to strangers either – but sometimes the hint of sea air and turning leaves make me really miss the Bay and Ocean States. And coffee milk.

So, I turned to the New England cookbook mentioned above, and came across discussion of maple syrup – and immediately resolved to make a maple dessert. I wasn’t too into any of the ones in em>Rain, Hail, and Baked Beans, so I kept looking. I was determined – I love my maple syrup. When I was a kid, I basically saw pancakes and french toast as maple syrup vehicles; I’d drench my Sunday breakfasts in the stuff. Because we were in New England – and because my parents, thankfully, care about such things – we always had the real deal, not “pancake syrup.” I also totally tried the maple syrup drizzled (OK, poured heavily) over snow after reading Little House in the Big Woods.

I wound up finding a recipe in The American Heritage Cookbook (one of my faves, you may have noticed) for Maple Gingerbread. It was clear from reading this recipe that it would be more of a cake-y gingerbread than a traditional dense loaf. It was also clear it would be awesome; it does not call for sugar – the only sweetener is maple syrup. I was also intrigued by the fact that the main fat is sour cream rather than butter – I love experimenting with the textures created by different fat/dairy combinations. This recipe, in fact, would probably hold up very well to veganization; just sub in applesauce for egg, and use Earth Balance and tofu sour cream. Enjoy!

1. Preheat the oven to 350 degrees and butter and flour a 9×9″ cake pan.
2. Sift the dry ingredients together in a medium bowl.
3. Beat the egg in a large bowl, and whisk in the syrup, butter, and sour cream.
4. Sprinkle one-third of the dry ingredients over the wet ones, blend with a rubber spatula, and repeat until wet and dry are fully incorporated.
5. Bake for 25-30 minutes, until the cake’s edges are golden brown and pulling away from the pan. Cool completely before frosting.

Blend all ingredients in a stand mixer using the paddle attachment. If the resulting mixture is too thick, using the amounts above, add extra cream 1/2 teaspoon at a time, until it reaches a spreadable consistency. Use immediately.