This year, as they have for the past few, Easter and Passover overlapped. I actually grew up celebrating Easter more than Passover; my Dad always took me through the Exodus story, but never got around to staging a full-on seder – egg hunt and chocolate bunnies, however, were an annual occurrence. So, I decided to continue my Easter tradition, and to look back to my Italian roots to do so. I made a classic Neapolitan Easter dish – a ricotta pie called a pastiera – and then decided to give a nod to Passover as well by throwing together a matzo kugel. And what did I do with all this food? Brunch, of course! 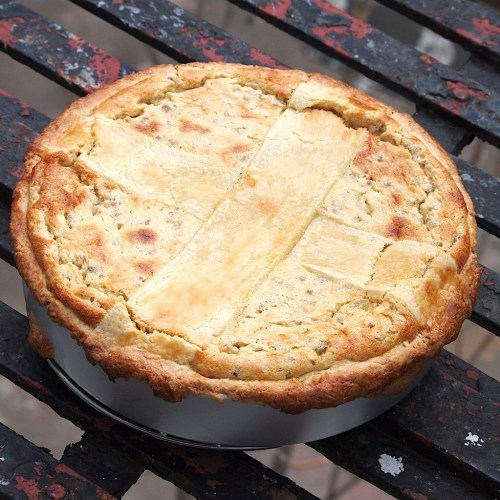 Ricotta, as it happens, is not the only main ingredient in a pastiera; the pie filling contains soaked grain – grano cotto (literally, “cooked grain”) – which gives it body and texture. None of my cookbooks spoke to the origins of this pie, but according to The Internet, this pie has origins in pagan spring celebrations, and the modern version was invented in the Middle Ages by a nun. Because my mom’s family is Neapolitan, I was hoping there might be a Del Gais pastiera recipe. Sadly, if there ever was such a recipe it did not make it to the Boomer generation. My mom did have a recipe from my grandmother’s best friend Marie (author of the wonderful pickled eggplant recipe I posted a couple of summers ago); I realized by looking at Gina DePalma’s recipe on Serious Eats, though, that Marie’s recipe was adapted for an American shallow 9-inch pie plate, where a true pastiera is more of a deep dish affair. Thankfully, my mom also scanned and sent over this recipe from Il talismano della felicita (the “Talisman of Happiness”) by Ada Boni: 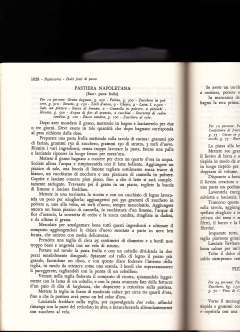 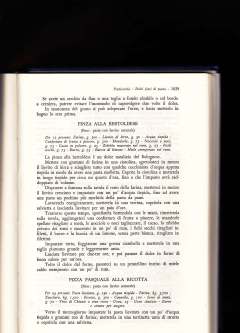 Ada Boni, whose masterwork was originally published in 1929, is to Italian cooking as Fannie Farmer is to American; Il talismano collects hundreds of regional recipes, and was apparently intended originally for an audience of housewives. This book, obviously, is in Italian. I haven’t seriously studied Italian since college but, thankfully, Google Translate and my general knowledge of baking (custard pies, in particular) helped me muddle through. The recipe below is translated and adapted from Ada’s.

My first step adaptation: Ada Boni tells her audience to start out soaking grain for 3 days. Thankfully, in this day and age one can buy the grain for pastiera pre-soaked and packaged. Grano cotto comes in cans or jars (usually in amounts designed for a single pie), and can be found online or in Italian specialty stores. I picked mine up at Buon Italia in Chelsea Market, but I know Di Palo’s in Little Italy carries it as well. If you really want to DIY, use 250 grams of barley, and soak away. 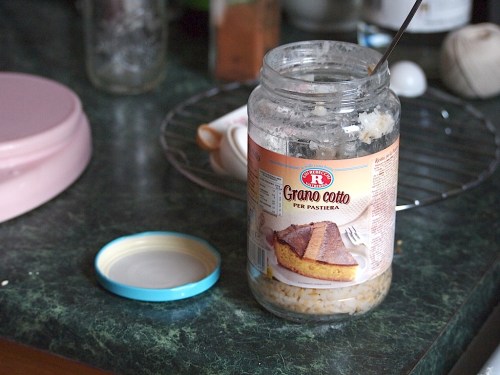 Whether you buy your grano or make it yourself, you will wind up with a dense glop – which is then cooked with milk and flavorings to form a less-dense glop, about the same texture and consistency as rice pudding. This porridge is intensely glutinous and, along with egg yolks, is the main binding agent in the pie filling. The other main ingredients are ricotta and candied fruit; the chief flavors are citrus – lemon zest and orange blossom water. While the orange water has a unique flavor, and adds a different and delicious dimensionality to this pie, I don’t think I’ll be using it again. I felt kind of asthmatic and itchy in the throat after I ate a large slice of pastiera and realized, after some thought, that I was probably having an allergic reaction to the flower water – it was the only ingredient in the pie which I never encountered before. This did not stop me from eating pie leftovers directly from the pan after my brunch guests left; I spent about two hours coming back to it, having a bite and thinking “Hmm, yah, this definitely makes my throat tingle,” and then repeating after about 15 minutes. Scientific method, people – gotta test your hypotheses. And everyone hates wasted pie. 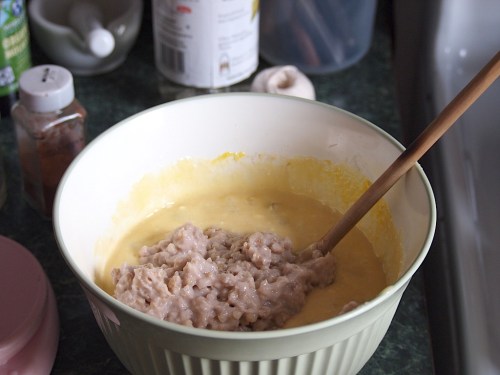 The ricotta filling was very easy to put together, once the grain was cooked and cooled – you basically stir everything together and dump it in a pastry-lined pan. The pastry used for this pie is a pasta frolla – which is really just the Italian version of a pate sucree (a sweet, eggy shortcrust). Ada Boni suggests using a deep 25-centimeter pan; in standard measurements, the closest size is 10 inches. I happen to have a 10-inch cake pan, but if you don’t have one lying around, just use a 9-inch pan. You might have some leftover filling (sad) if you do this – even my 10-inch pan was pretty full.

A pastiera is traditionally covered with a pretty lattice top. However, I was totally running behind and feeling lazy yesterday, so I took advantage of the holiday and, as you can see above and below, kept it simple. Really – if you can’t put a cross on a pie on Easter, when can you? 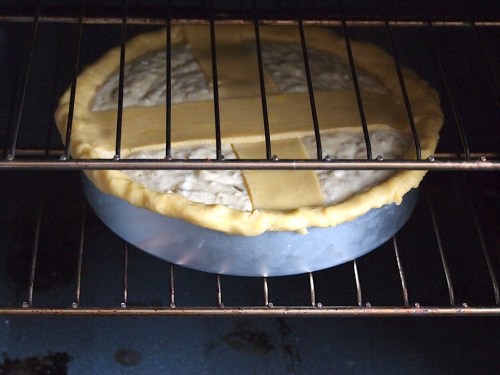 Once the pastiera was in the oven, I whipped together an apple matzo kugel pulled from the pages of my beloved 1952 Jewish American Cookbook. I love a good kugel – and I wanted both to give a little not to Passover and to ensure my kosher-keeping guests had something to eat. It’s so simple – you basically just dump an eggy mess into a pan – yet it’s utterly satisfying and delicious. I made one change to the recipe I found – I substituted walnuts for currants. I love a little crunch and nuttiness in a matzo kugel. 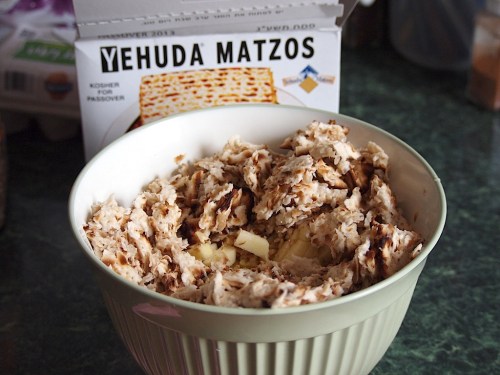 This kugel was as tasty as it was easy – there were 10 of us at brunch, and we made fast work of it while waiting for the pie to cool enough to be cut into. My cousin Alex (who, FYI, has an awesome blog of her own) was kind enough to wield the camera while I was serving, and she got some really awesome action shots. Our grandfather was a photographer and many of his descendants have inherited shutterbug tendencies – hope we’re doing him proud. 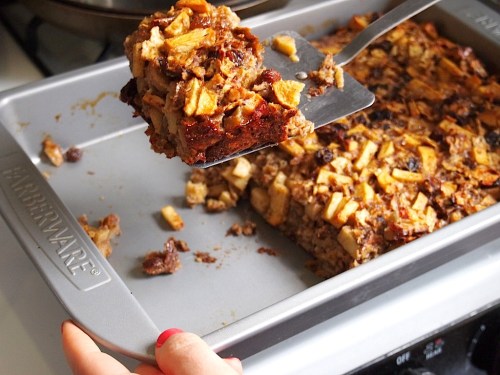 Frankly, though kugel kept everyone happy for a while, we probably cut into the pie a little to early because people were eager to move from Passover to Easter. OK, perhaps it was less that we opened the pastiera early and more that I got a bit of a late start. It’s supposed to cool fully before being served, but we started in on it when it was more “slightly warm.” As a result, you can see the middle was a little runny. The crust, however, was perfectly flaky and un-soggy, and even if everything fell apart it still all tasted great when scooped back together for a single bite. 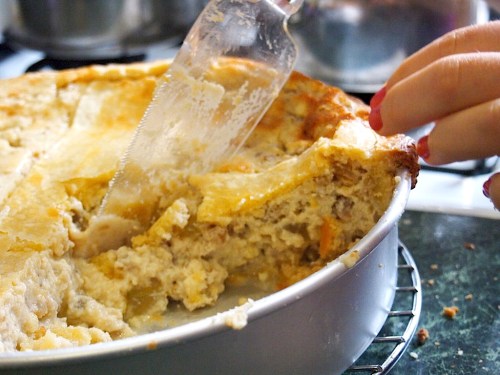 Didn’t hurt that we were doubly chilled out by delicious, spicy Bloody Marys. I totally cheated on these, and bought a mix produced by McClure’s Pickles. This stuff is so damn good, though, that I’d cheat again anytime. I also highly recommend serving it with peperoncini in place of celery, if you really want to bring on the burn. I’d been out dancing the night before Easter, but this combo totally woke me up [insert obligatory resurrection joke here]. 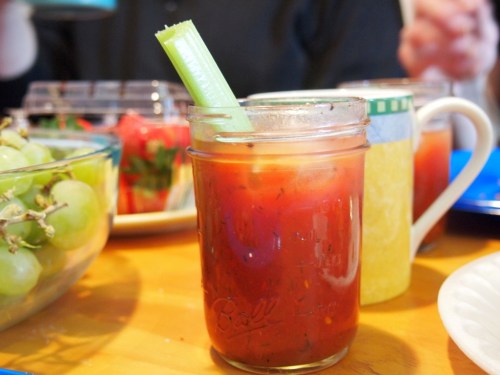 Anyway, ’twas a lovely way to spend two holidays – with friends and family – and I’m definitely trying both of these recipes again next year. Or sooner, since I accidentally bought 3 boxes of matzo on FreshDirect, and don’t know what to do with them. (Any takers?) To close, courtesy of Alex, a rare shot of me actually at work in my kitchen. Ignore the mess (and the random drying Camelbak in the background) and enjoy the recipes below. And for those of you celebrating Passover (I am not among you this year, but I have been in the past) – hang on, only 30 more hours until bread! 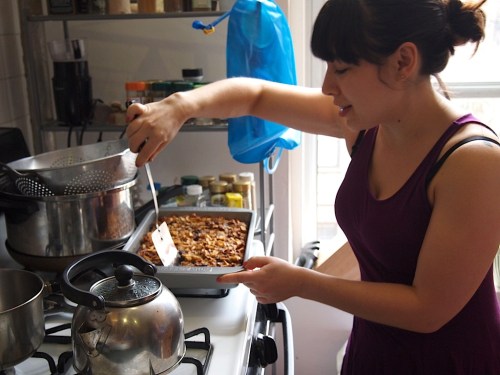 1. Preheat the oven to 350 degrees. Grease a 9×13-inch pan.
2. Soak the matzo in water until soft, about 5 minutes. Remove the matzo from the water and press out as much liquid as possible.
3. Mix all ingredients together and pour into the prepared pan. Bake for 45 minutes.

1. To make the pastry: Pulse the flour, sugar, and butter in a food processor until it achieves a cornmeal-like texture. Add the egg yolks, milk, and water, and pulse a half dozen times to blend, then turn on to a floured surface and knead several times to bring the dough together. Separate it into two pieces, one half the size of the other; flatten the pieces into discs, wrap them in plastic, and refrigerate for at least 30 minutes.
2. Preheat the oven to 350 degrees and position a rack in the middle. When the dough is chilled, roll the larger disc out to fit a 9- or 10-inch cake pan (2 inches deep). Place the dough in the cake pan and trim the overhanging edges to half an inch. Set aside in a cool pace.
3. Combine the grano cotto, the milk, 1/4 teaspoon of cinnamon, zest of one lemon, and 1/4 teaspoon salt. Bring this mixture to a simmer, and cook over low heat for about 20 minutes, stirring often, until the milk is absorbed and the ingredients form a glutinous porridge. Pour the porridge into a platter and let it cool fully.
4. Mix the ricotta thoroughly with 1/4 teaspoon of cinnamon, zest of the second lemon, 1/2 teaspoon salt, the orange water, and the egg yolks. Add the citron peel and the cooled grain porridge, and blend.
5. Beat the egg whites to stiff, shiny peaks and fold them into the other ingredients. Pour this mixture into the pastry-lined pie tin. Roll the second (smaller) dough disc out, cut it into strips, make a lattice top, and fold the overhanging dough under to form a nice edge.
6. Bake for 45-50 minutes, until the crust is a nice golden brown. Cool completely before serving.