Reason #5,000 I love James Beard: his whiskey cake recipe ends “I like to pour an extra half cup of whiskey over the cake.” I also love that this dense, boozy, fruit-and-nut packed brick is called a “cake.” Really, in modern baked good taxonomy it is probably closer to the “quick bread” phylum than the cake one. James Beard’s recipes and original cookbook, though, hark to a time when baking was more primitive and the primordial soup of “Sugary Things” had not yet separated into sharply defined branches. Well, maybe it had in France. But not here in ‘Murika! 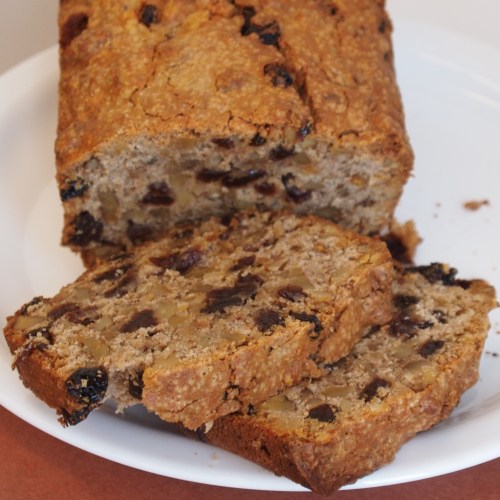 This cake is literally ALL nuts and raisins. Check that out! It took pretty much forever to bake. I had a couple of friends over for an afternoon of wine and baking and, in the time it took this to cook, we polished off most of a bottle, finished a big chunk of my bresaola…and got hooked on My Fair Wedding with David Tutera. Now that’s efficiency for you! 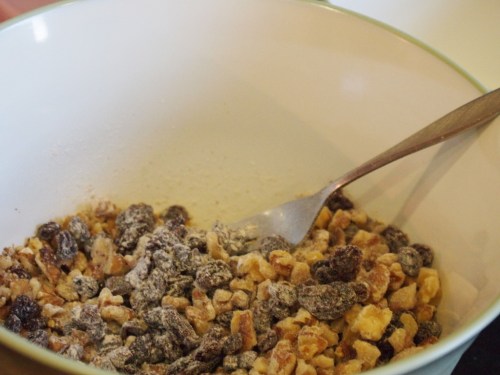 In the same afternoon, I played not only with raisins and nuts, but with gumdrops! I’d found a recipe for “Grandma’s Gum Drop Cookies” in the Dallas Junior League Cookbook more than a year ago have been itching to make it since. “It’s too weird!” I kept telling myself. Really, though, that’s what made me keep coming back to it. That recipe was an itch that needed scratching. So, I bought my gumdrops and cut ’em up with scissors and scratched that baking itch like a bear back-scratching on a tree. 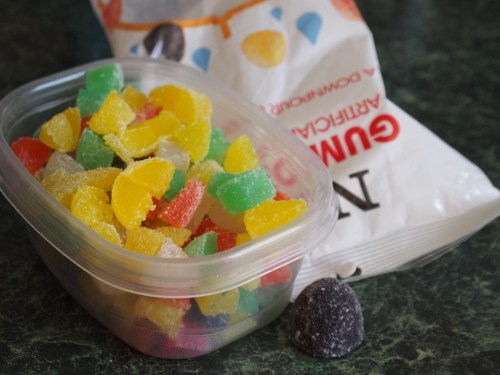 And…DAMN those bars were weird. I realized after I made them that the recipe calls for no butter or oil – only eggs. So, they were kind of hard and biscuity…with random gummy bits. And lemon icing. I admit I ate four – not because they were good, but because I kept trying to puzzle out what the hell I felt about them. End result: I think I will hold off posting this recipe until I rework it with some fat. And maybe spice drops instead of gumdrops. 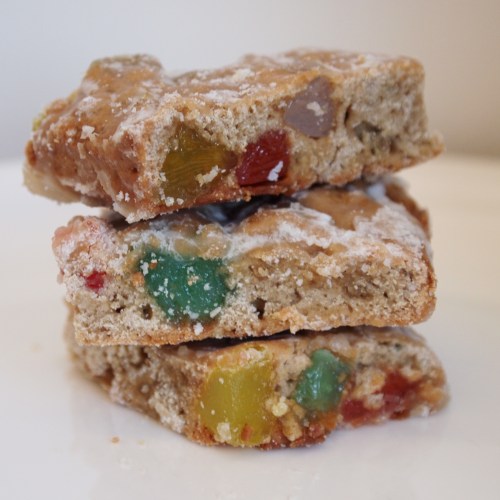 The look of the finished bars, along with their texture, got me thinking. What do those remind you of? To me they look exactly like slices of fruit cake. I don’t know how much gumdrops cost in the 1930s to 1950s when “Grandma” came up with her cookies – but today gumdrops are far cheaper than candied fruit. Perhaps this recipe was originally a budget-friendly way to have a colorful Christmas treat. While you think on that, try this whiskey cake recipe out. Be warned, though: it might make thinking a little harder, since it’s got enough raw booze to give a swift kick to the ol’ brain cells.

1. Grease a 5×10-inch loaf pan with butter and preheat the oven to 325 degrees.
2. Mix 1/2 cup of the flour in with the nuts and raisins to keep the fruit from lumping together.
3. Sift the rest of the already-sifted flour again with the baking powder and salt.
4. Cream the butter and sugar until light and fluffy, and add the yolks of the 3 eggs, one at a time. Mix the nutmeg and 2/3 of a cup of whiskey in a small bowl, add one third of this liquid to the butter-egg mixture, and beat until combined. Add half the flour mixture and mix well. Add a second third of the whiskey, then the last of the flour and the last of the whiskey, mixing well after each addition.
5. In a large bowl, combine this batter with the nuts and raisins and mix until they are evenly distributed through the batter.
6. Beat the egg whites until stiff, but not dry, and fold them (as best you can) into the batter.
7. Turn the finished batter into the loaf pan and let it settle for a minute. Bake for approximately 1 hour, 15 minutes, until a tester inserted in the center comes out clean.
8. Let the cake cool in the pan for about 15 minutes, then pour a 1/2 cup of whiskey over it if you’d like some kick. Let it cool for 45 minutes more before turning it out of the pan.