I’ve been casting around for a recipe suitable for a “first post.”  Should I start with a something outrageously kitschy?  Resurrect a glorious culinary gem?  I eventually thought: what’s more vintage than my grandma’s recipe box?  If I’m going to be exploring culinary history, I might as well start by exploring my own.  So, my first post is a tribute to my Grandma Viv: Rugelach.

This tribute is not as literal as it could be.  I mostly remember my father’s mother making rugelach very simply, from leftover pie dough and cinnamon sugar.  With her in mind, though, I’ve cobbled together the following: Joy of Cooking dough (pretty vintage itself), one recipe with a more traditional filling (raspberry jam, cinnamon sugar, shaved chocolate) and one with an original filling (peach jam and candied ginger – I call this “original” but my dad and grandpa would probably condemn it as “goyische”).

I’ve cobbled together a couple of old recipes, and added a new twist.  For me, though, “vintage” isn’t just about the publication date of a book: it encompasses old world feelings and traditions, apron-wearing, seafoam green, new wonder at the usefulness of a Kitchenaid mixer.  For me, rugelach carry all that and more.  So, for my Grandma, for Mrs. Rombauer, and for Bubbes everywhere… 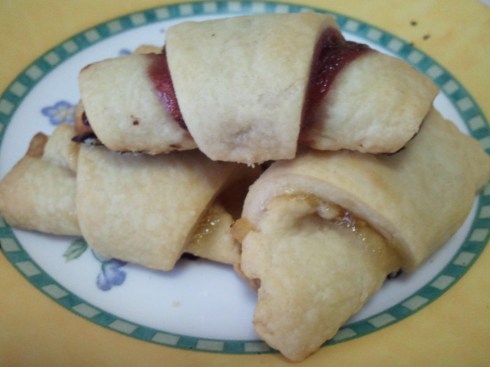 1. Mix the cream cheese and butter until fluffy and well combined (about 20-30 seconds on medium-high in a stand mixer).
2. Add all the flour at once and mix on slow until it forms a solid mass with the butter and cheese. Turn this mass out onto a floured surface and knead it about half a dozen times, until there are no large chunks of butter or cream cheese visible in the dough.
3. Separate the dough into 3 parts and pat these sections into discs about 1 inch thick. Cover the discs in plastic wrap and refrigerate for at least an hour.
4. Preheat the oven to 350 degrees.
5. Remove one disc of dough from the fridge and roll it out on a floured surface to 1/8-inch thick circle. Cut the circle into 8 or 10 pie-shaped wedges, keeping these wedges together in their original circle.
6. Spread about 1/4 c. of the jam of your choice on the round of dough, avoiding the center and leaving a band of clean dough about an inch wide at the outer edge. Sprinkle about 1 tbsp. cinnamon sugar over the jam and then 1 tbsp. of chocolate shavings (if using raspberry jam) or 3 tbsp. chopped ginger (if using peach).
7. Starting from the outer edge, roll each slice in toward the center point. Place the resulting roll point-down on a cookie sheet covered in parchment.
8. Repeat for the second and third discs of dough.
9. Bake 20-25 minutes until the cookies are golden brown on top.
10. Cool and enjoy!