Passover has been past for a while. At this point many [meat-eaters] who observed it are still breathing a big sigh of relief every time they sink their teeth into a piece of bread. The hankering for brisket from the first seders, however, can also linger for a while after the holiday. Whenever I cook brisket I make a lot, and have leftovers for days. Yet I’m always bereft when the last of it is gone: I’m kind of an addict.  Thankfully, I found a recipe in The Complete American Jewish Cookbook for a prune-sweet potato tzimmes made with brisket. It’s far simpler and faster than a full-on brisket, but still yields tender, flavorful meat. 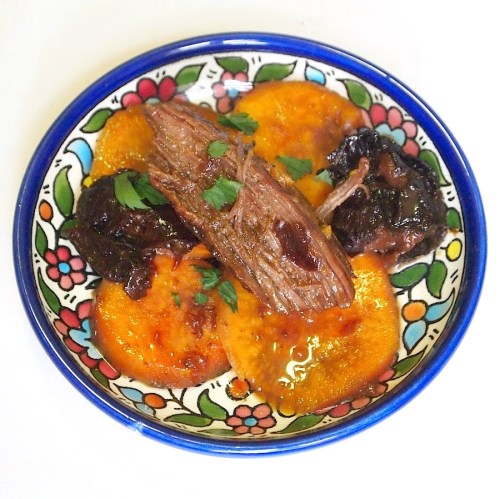 Tzimmes, for those of you who did not immediately leap to read the Wiki article linked above, is a traditional Eastern European Jewish sweet veggie dish. It’s usually made with things like carrots and turnips; in fact, I never knew one could have a meat tzimmes until I found several in the book from which I took this one.

I made a major edit to this dish to bring it out of “holiday land” and into the everyday: I quartered the original recipe and used flank steak instead of real brisket. This let me get just over a half pound of meat and make “tzimmes for two” – the biggest problem making brisket on a weeknight is less the cut itself, and more that it comes in massive chunks which take ages to braise. Using a smaller piece of meat halves cooking time, and the cooking methods here (already intended for a tough cut) break the flank steak down to tender falling-apart-ness.

See, this recipe pretty much assumes you’re hanging out in a shtetl (or possible the Lower East Side) where meat is scarce and you don’t have fancy pans. Hence, this beef is not treated gently: to begin with you pretty much toss it in a pan with prunes and boil the crap out of it. 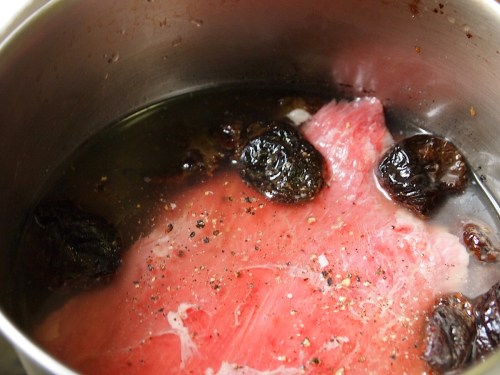 Old world cooking techniques aside, the addition of sweet potatoes to this dish bring a distinctly New World twist. They line the casserole in which the beef is cooked after its time on the stovetop. 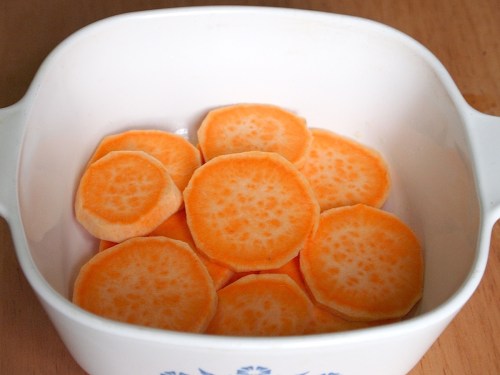 Flat-out boiling meat might seem inelegant to a cuisine mindset steeped in French techniques (a traditional braise starts with searing before liquid is added), but the beef and prunes yield a rich, brown gravy. This gets poured over the sweet potatoes in preparation for oven time. 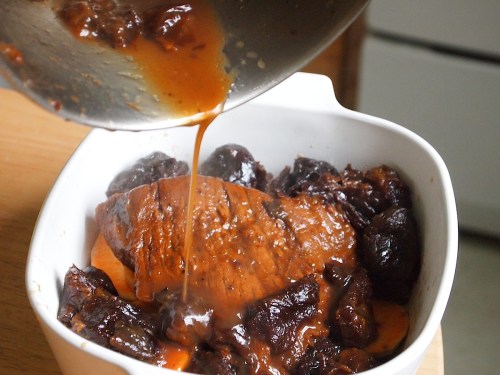 The meat is added to the casserole, covered in sauce, and dotted with brown sugar. Another divergence from French technique: where Gallic tradition dictates acid be added in the initial liquid cooking stage, here lemon juice is tossed in just before putting the meat in the oven for second cooking phase. 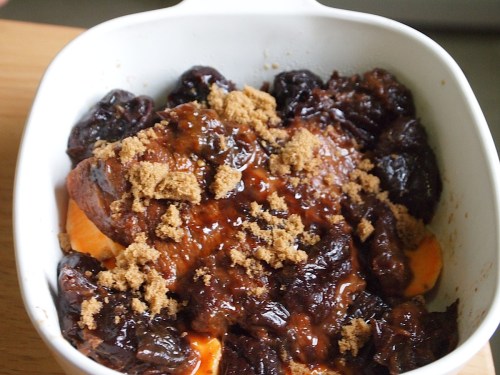 Though it took a different course in its path to the plate, this tzimmes would up at the same end destination: Yummytown. Population: Me. And my friend Diana, who was incredibly startled to discover that a dish this flavorful was cooked without red wine. See? The acid came through after all. And who can resist meat cooked with dried fruit…or, for that matter, dried fruit cooked with meat… 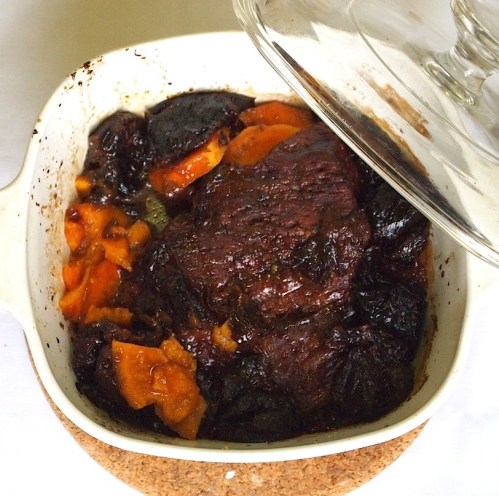 1. Combine prunes and meat in a heavy-bottomed saucepan, and add water just to cover. Season with salt and pepper, and simmer over low heat until the meat is nearly tender (up to 90 minutes).
2. While the meat is cooking, peel the potatoes, slice them thinly, and use them to line the bottom of a casserole or Dutch oven just big enough to fit the cut of beef. Use all the potatoes, making as many layers as necessary. Preheat the oven to 350 degrees.
3. Remove the meat from the gravy and place it on top of the potatoes in the casserole. Pour the prunes and gravy over, and sprinkle the sugar and lemon juice on top.
4. Cover and bake about 40 minutes, until the potatoes are cooked and the meat is tender and browned. Serve hot, sprinkled with herbs.

**I’m setting out the full recipe here. To make this a faster, two-person dish: use a half pound of flank steak, quarter the rest of the ingredients, and boil the meat for only 30 minutes.