Some very experienced epicures and cooks, think the old-fashioned way of preparing bacon is troublesome and useless. They say that legs of pork placed upright in pickle, for four or five weeks, are just as nice as those rubbed with so much care. The pickle for pork and hung beef, should be stronger than for legs of mutton. Eight pounds of salt, ten ounces of salt-petre and five pints of molasses is enough for one hundred weight of meat; water enough to cover the meat well—probably, four or five gallons. – Mrs. Child, The American Frugal Housewife

Yes, our topic this week is bacon. Specifically, homemade bacon. Sorry, not a full leg of pork (I don’t have a barrel or room for one in my apartment). Rather, this piece of pork belly: 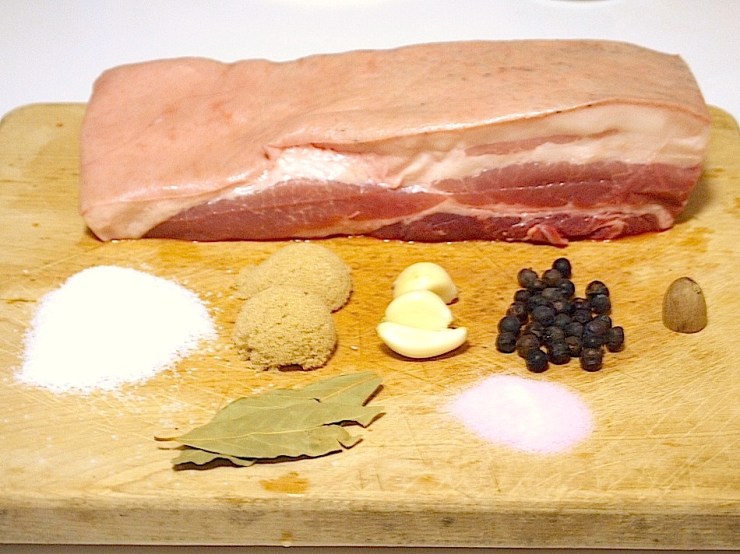 This chunk of pig came from Flying Pigs Farm, which maintains a stand at the Union Square Farmer’s Market. The cure ingredients (clockwise from upper left): kosher salt, brown sugar, garlic, juniper berries, nutmeg, Prague powder #1, bay leaves. When I make carnitas and other heavily spiced, long-cooked dishes I tend to get my pork cheap at the local Latin grocery; for a cure, though, I wanted high quality and high meat-to-fat ratio. I normally have fun breaking down the Latin grocery’s pork cuts (they always come whole, bone-in) and trying my hand at butchery. For my first Charcutepalooza attempt, though, I wanted only the best…

What, you ask, is Charcutepalooza? It’s the brain child of two brilliant lady food bloggers, Mrs. Wheelbarrow and The Yummy Mummy. You can read more about Charcutepalooza here, but the basic idea is: make one meatastic creation a month from Michael Ruhlman’s Charcuterie. I missed the first one (Duck Prosciutto), but I’m starting that and the current challenge – the Pork Salt Cure – at the same time. As you can see from the picture above, I just started my pork cure: I’m makin’ bacon.

But, you say, Michael Ruhlman’s book was published in 2005! This is not “vintage” at all! And you’re right. As I’ve gotten more into this blog, though, I’ve started thinking more about what my concept means and where I want to take it. I started out with the idea of creating a kind of recipe Wunderkammer. As my blog has grown, however, I’ve realized my long-dormant archaeologist/anthropologist instincts have led me to get more and more fascinated with the development and nuance of food culture. I think that the current DIY movement is a really cool example of the present actively reaching back to the past. I’ve been trying for a while to get active in it and get my hands dirty; I think the same interests and impetus led me to vintage cookbooks and to DIY, so I see no reason to segregate the two. Mrs. Child apparently agrees: the recipe and book I’m using might not be vintage themselves, but they reflect and adapt traditional techniques. It’s so cool that this has really caught on, and it’s inspiring me to get on some other DIY projects I’ve been thinking about for some time (coming soon: ginger beer!).

Finally…it’s bacon, guys! Amazing! Check back next week: the bacon should be ready Monday, January 31 as we head down The Bacon Road: 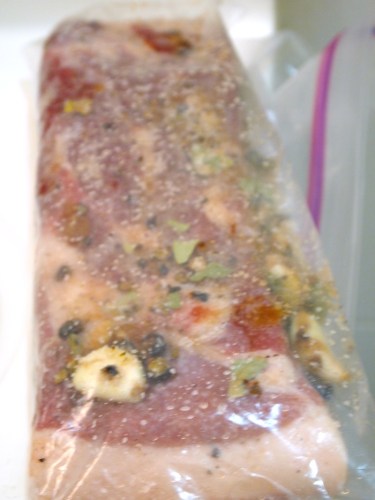 Far tastier than the Yellow Brick Road, no?