I’m starting this new year out with an old recipe. Well, to be clear, this recipe is old to me, since I made it for my pie party in October, but new to the world, since it’s an original concoction. Again, though, that’s not quite accurate – it’s actually a brand new combination of two very traditional recipes: raised pork pie and scrapple. I tossed a few apples into the mix…and came up with scrapple-apple pie. 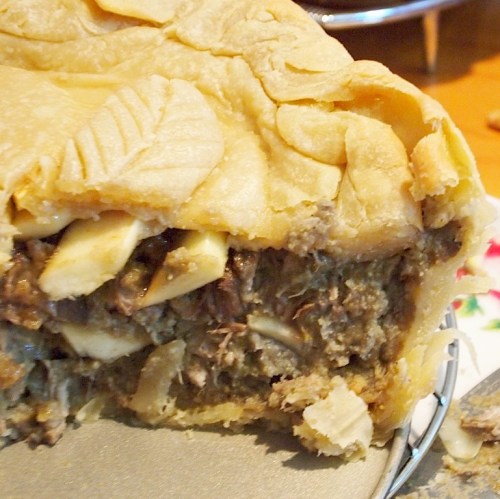 This pie was comprised of one traditional hot water-lard crust, a double recipe of scrapple, and three layers of apples. A formula for deliciousness. As some of you may recall, this pie was a surprising hit at my October party. I keep wondering whether it would have been so popular if my guests knew it started here, with some seriously unappetizing boiled pork shoulder and liver. 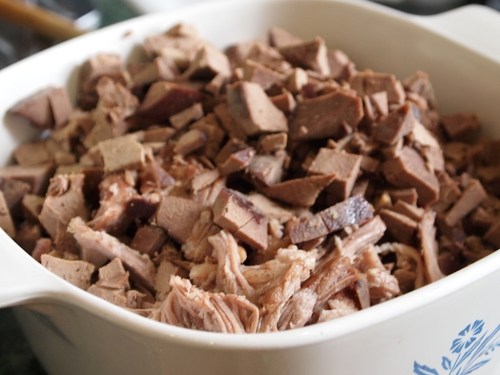 Yep, delicious, sliceable scrapple originates as a mass of meaty scraps. I was also lucky enough to get some info about the historical origins of scrapple; a friend getting a degree in library science sent out a request for researchable topics and, when I responded mentioning this pie and post, she hooked me up with one of her classmates. It turns out that scrapple, though associated today with the Pennsylvania Dutch, had its roots in the Old World. The dish originated, under a number of different names, in Northern Germany and Eastern Holland. There, it was made with the spices and leftover pork bits still incorporated in modern scrapple – but Old World grains were used, and the mixture usually included blood. When it came to the Americas in the seventeenth century, the blood was omitted and corn was incorporated as one of the main grains. 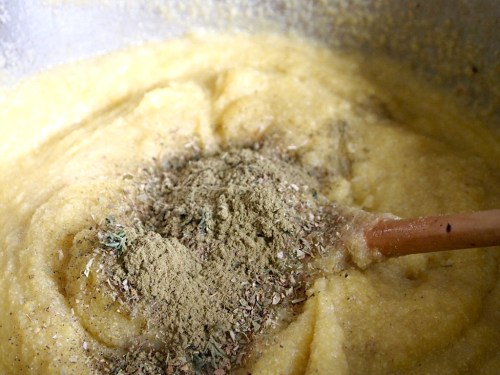 This scrapple recipe, which I found in The American Heritage Cook Book, mixed pork parts with corn meal and spices.

I doubled the recipe in the book: a single recipe fills a loaf pan, and I wanted enough for a 9-inch springform. Though I faithfully followed the recipe for the scrapple itself, I added my own touch by putting two layers of apples in the middle of it. 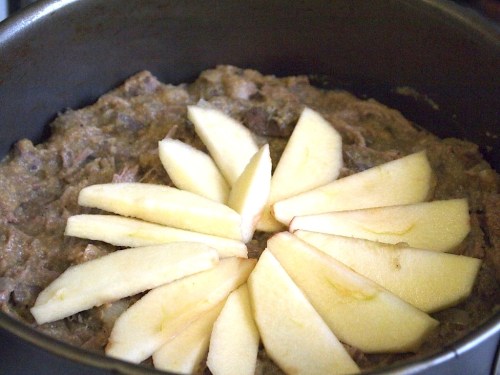 Once the scrapple “cake” had set overnight in the fridge, I tackled my first lard crust. I pulled the recipe for the crust from the gorgeous River Cottage Meat Book. Unlike most pie crusts you’ve probably encountered, which mandate that ingredients be kept cold as possible to inhibit gluten development, Hugh Fearnley-Whittingstall’s traditional formula has one pour melted butter and lard straight off the stove and into flour and eggs. 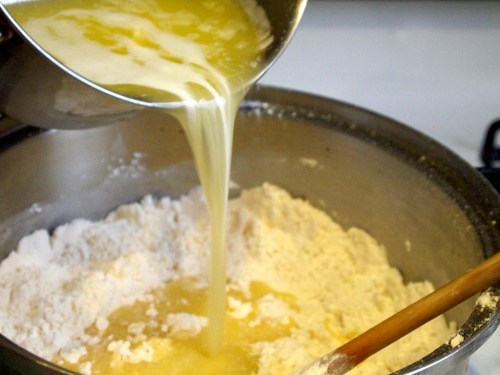 While dough chilled for a bit, I unmolded my scrapple, and revealed it in all its congealed glory. 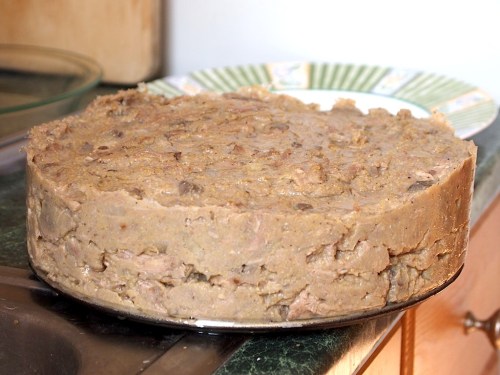 Then came trickiest part of this whole operation: figuring out how to get this firmed-up “meat cake” inside the pie. I decided to try rolling out the bottom crust and putting it in a springform pan, then popping the solid mass of scrapple inside. 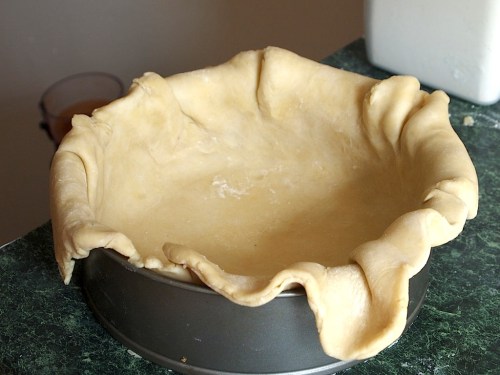 I trimmed the sides of my scrapple cake to fit the dough (it’s thick stuff), and then I shoved the pan over the scrapple. In retrospect, this was dumb. It turned out fine, but I realized it would have been far, far simpler to drape the dough over the meat and then put on the pan. What’s the use of having a springform with separable sides if you don’t use it? I describe this method in the recipe below. If you don’t have a springform, though, you can rely on a good old combination of pushing, pulling, jimmying, and gravity. 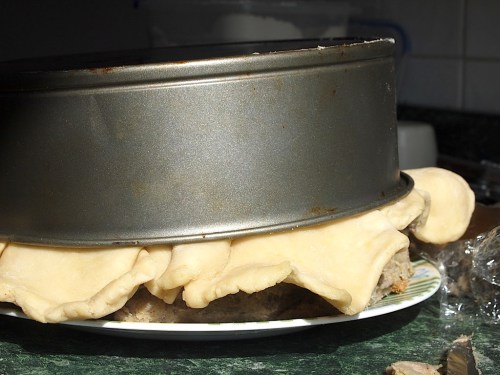 Eventually, I got my scrapple inside its crust – somehow avoiding any tearing or serious bunching-up. I knew it would cook down inside, so I put apples and brown sugar on top in the hope that some delicious caramelly juices would release and run down the sides within the crust. Scrapple is traditionally fried up in slices and served with maple syrup, so I figured a little sweetness would complement it well. 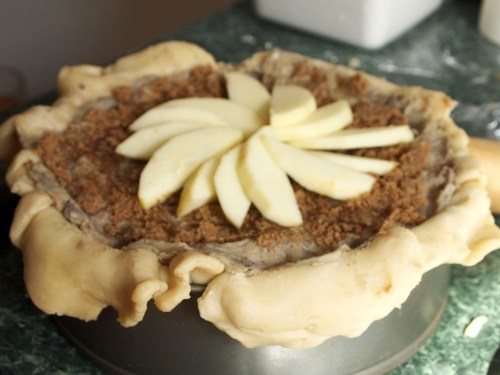 To really do my thick English lard crust justice, I just had to add leaves. They’re really very simple, if you haven’t tried them: just cut out a leaf shape and score some veins in with a small sharp knife. Brush a little egg or milk on the bottom to glue them on, and bake it up. People really go nuts for pies with leaves on for some reason – I guess it’s like “fall squared.” They sure went nuts for this one: not only did it have leaves, it was about 5 inches deep and filled with pork. 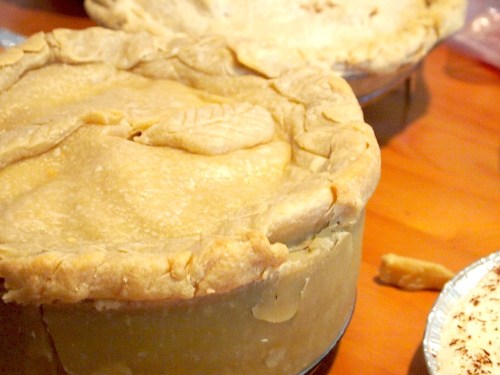 And so, before leaving you with my recipe, I submit a 1906 toast to scrapple:
“The world is all a fleeting show
Since Adam ate the apple
Its smiles of joy
Its tears of woe
Deceitful shine
Deceitful flow –
There is nothing true but – scrapple.”

Not quite an “Address to a Haggis” – but hey, one can only wax so poetic over a single variety of offal.

1. Make the crust: Heat the lard, butter, and water until the fats are melted – stop before the mixture reaches a boil. Mix the flour and salt in a large bowl and make a hollow in the middle. Add the eggs, stir gently with a knife or wooden spoon until partly blended with the flour, then add the water and melted fats. Mix to form a soft dough, adding up to 3 tablespoons warm water if the dough is dry. Knead the dough briefly, and refrigerate for 1 hour.
2. Place pork shoulder and liver in a saucepan and just cover with water.  Cook for 1 hour over medium heat then drain, reserving the broth.  Let the meat cool and chop it as fine as possible.
3. Bring 2 cups of water and 4 cups of the broth to a boil and gradually add the cornmeal, stirring constantly. Cook until the mixture thickens (about 20 minutes), then add meat, onions, and spices. Cover, lower the heat, and simmer for about 1 hour.
4. Pour one-third of the mixture into a 9-inch springform pan, and fan out one sliced apple in a circle on top. Add a second third of the scrapple mixture, a second apple, and then the last of the mixture.
5. Cover the pan and chill until firm – at least 6 hours, preferably overnight.
6. When the scrapple is nice and firm, unmold it onto a plate by removing the sides of the springform pan, placing a plate on top of the scrapple, and inverting it. Trim about 1/4-inch off all sides of the loaf.
7. Divide the dough into two parts: one part should be about one-quarter the total mass, and the other about three-quarters. Roll the two-thirds out large enough to cover the scrapple, then drape it over the meat. Place the bottom of the springform pan on top of the crust, then push the ring out as wide as it will go and slide it over the sides of the crust-covered scrapple. Secure the pan and turn the whole thing upside-down; you should have a scrapple inside crust.
8. Top the scrapple with the remaining apple and sprinkle the brown sugar over. Roll out the remaining crust, place it on top, and crimp the edges to seal; make sure these crimped edges stay within the sides of the pan, so you don’t have trouble unmolding when the pie is baked. Cut a cross-shaped slit in the top of the pie, and decorate as desired with extra dough.
9. Bake at 350 degrees for 30 minutes, then reduce the heat to 325 and bake for another hour and a quarter. Remove the pie from the oven, brush with egg glaze, and bake for 15 more minutes. Let the pie cool for about 20 minutes, then remove the springform ring.