…and you wind up with this: 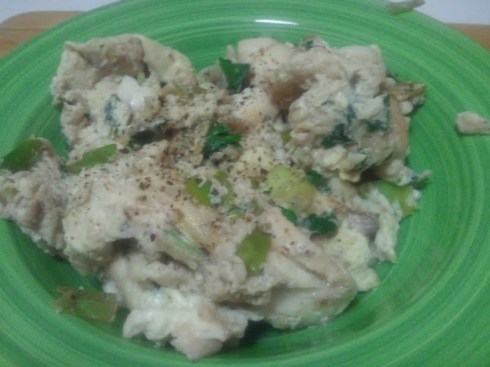 This is actually a great starter recipe if you want to dabble a little in Roman cooking: it’s really easy, it doesn’t need too make esoteric ingredients, and the flavors are mild. The directions above translate roughly to: “Put raw fish in a pan. Add oil, liquamen, wine, cooking liquid, a bundle of leeks, coriander. While it is cooking, chop pepper, ligusticum, oregano, leeks, mash the things together, suffuse them with their juice, scramble raw eggs, mix them in proportion. Pour them into the pan and cook until they bind. When it holds together, sprinkle with pepper and serve.”

Liquamen (along with the more famous garum) was a sauce made from fermented fish. Romans used it ALL the time. Roman food actually has a lot of strong flavors – honey, sweet wine, vinegar, fish sauce, among others. When you don’t have a fridge you have to cover up not-so-great-tasting meat, fish, and produce a lot more. Because this recipe is fish-based the fish sauce flavor (I use Thai fish sauce – nuoc nam) doesn’t come through so much. I’ll have to do a full garum post soon: the history of the Roman fish sauce industry is really fascinating.

The other untranslated ingredient above, ligusticum, is an herb. It is apparently some variety of licorice-root. I just use parsley. Here’s a followable version of the recipe above. It’s actually healthy and tasty, and would go very nicely with rice or crusty bread.

1. Cut the fish into 1- by 3-inch strips and set aside.
2. Heat oil in a sautee pan over medium heat. Add the leeks, stir for about a minute, then add the wine, fish sauce, and coriander. Cook until the leeks begin to soften.
3. Add the fish. Cook for 1 minute, add the parsley and some ground pepper, turn the fish pieces over, and cook for 1 minute more.
4. Pour in the eggs and scramble as they start to firm up. Break the fish pieces up a tiny bit and cook until the eggs are set. Serve and enjoy the fact that you’re sampling a recipe that’s nearly 2 millenia old!