Sometimes I order groceries online, and sometimes I get confused about quantities and order ingredients in larger packages than I need. And then there are the exceptional times – like last week, when I not only ordered a massive bag of golden raisins, but managed to accidentally place two in my shopping cart and check out in such a check-out out state that I didn’t notice. This avalanche of raisins, however, shook loose some creativity: I came up with a great recipe for Rum Raisin Bars. 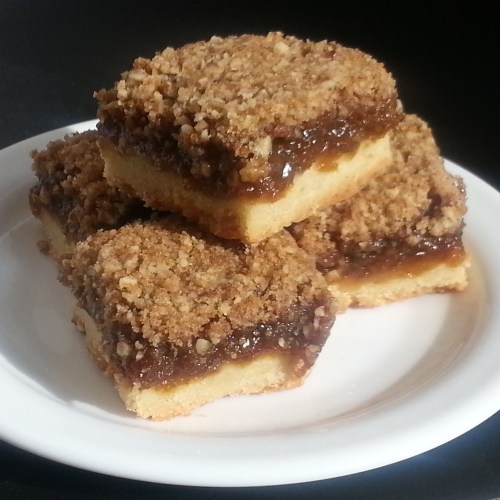 First off, please pardon the picture quality, and lack of supplemental shots; my camera is going into the hospital tomorrow, and I’m hoping for the best. In absence of illustration, I’ll have to rely on prose.

You may have noticed I am, once again, straying from pure vintage. And that I have, once again, been enabled by Baked Explorations. Yes, I took the quantities and techniques used for these bars from a recipe for Apricot-Rosemary Bars of which I am rather fond. While starting from scratch is wonderful, I think it’s also exciting to evolve recipes. Where, I wonder, would the rum raisin bar family tree take you? Definitely to Red Hook* and Baked – and beyond, perhaps to one of the Southern grannies from whom Matt Lewis and Renato Poliafito love adapting recipes. I think that my version may be a little regressive; rum-raisin is a flavor profile closer to those traditional American roots than apricots and herbs.

This recipe actually came to me in the midst of a search for a raisin jam recipe that would let me clean my entire raisin stock out in one go. I’d intended to stick with the Cookbook Archaeology mission. Raisin jam, however, led to thoughts of jam bars. And jam bar recipes led me to David Lebovitz’s adaptation of the Baked Explorations apricot-rosemary recipe. Where the original recipe cooks apricots into a goopy filling with water, Lebovitz suggests using wine. I already had raisins on the brain, and from there the leap to rum was almost to easy. My other main contribution to the new version: I tossed orange zest into the bars’ shortbread base to cut the sweetness of the raisin filling.

And that’s how baby recipes are made. Enjoy!

* A post-Sandy note: I came through almost insultingly unscathed – I volunteered in Red Hook the weekend after the storm, though, and can attest that the physical Baked bakery is on its feet, though the area can still really use support: http://rhicenter.org/.

1. Lightly grease a 9-inch pan and line it with parchment paper, leaving an overhang on two sides of the pan.
2. For the dough: Use a stand mixer with paddle attachment to cream the butter with the powdered sugar, vanilla, and salt until it’s light and fluffy. Whisk the flour together with the orange zest in a medium bowl, then gradually add it to the butter, mixing until the dough is smooth.
3. Press the dough evenly across the prepared baking pan with lightly floured hands and refrigerate for at least 30 minutes.
4. For the filling: Combine the raisins, rum, brown sugar, molasses, and salt in a medium saucepan. Simmer over low heat for about 45 minutes. Most of the liquid should have been absorbed or evaporated by this point; if it has not, turn the heat up to medium-high and cook the mixture down, stirring constantly, until only about 1/4 cup of syrup remains. Let cool for a few minutes, stir the mixture a couple of times, then puree it in a food processor until smooth.
5. While the filling is cooking, preheat the oven to 350 degrees. Baked the shortbread for 25 to 30 minutes, until golden. Let it cool to room temperature while you finish the raisin filling and make the crumb topping.
6. For the crumb topping: Pulse the pecans in a food processor to chop them coarsely. Add the flour, brown sugar, and salt, and pulse a couple of times to blend. Add the butter and process for about 15 seconds, until the mixture is even and sandy.
8. Spread the apricot filling over the shortbread in the pan evenly, then top with the crumb topping and bake for 20 to 25 minutes, until the topping is browned.
9. Remove from oven and let the bars cool completely in the pan. This may take several hours. Once the bars are cooled, lift them out of the pan by grasping the edges of the parchment paper. Slice into squares.
Note: The bars can be stored at room temperature or in the refrigerator for up to three days.