And now to the real classics. We’re still using a newfangled vodka pie crust here, but the fillings? Totally old school: apple pie and chess pie. Before we get on to the pies themselves, I think I’d better address some crust questions raised in the comments on Part 2. Namely: can one use liquors other than vodka in a crust?

This brings up some really 21st-century cooking science issues. The reason this crust uses vodka is not to use flavor – quite the opposite, since the alcohol totally cooks off and vodka is pretty flavorless otherwise – but to create texture. Very often when one works a pie crust by hand, the butter starts to soften and glutens form and toughen up the crust. We love gluten formation in bread and flour, but when this occurs in pie-baking we call the crust “overworked.” And not Blue Ribbon-worthy. Alcohol inhibits gluten formation, so vodka adds moisture to the crust while keeping it nice and flaky. Just a warning while we’re on the topic: this dough is a little softer than most when you’re rolling it out, so be very gentle.

Theoretically, any spirit with the same alcohol content as vodka (80 proof, or 40%) should have the same effect. Other alcohols will, however, add different flavors, and higher sugar contents might have interesting outcomes. My grandmother always used orange juice as the liquid for her pie crusts. The flavor doesn’t come through strongly but adds a tiny bit of acid; perhaps a citrus flavored vodka could yield similar results, along with maximum flakiness? Worth a try, for sure!

Now back to old school pies. I made my apple pie the only way I know how: apples, sugar, lemon, and spices. Tiny bit of flour to absorb a little juice…and go! Over the years, I (along with generations of cooks) have tweaked and experimented with this basic formula. In this particular pie I used brown sugar, to give a little more fall flavor. I also used Granny Smith apples only, since that’s what my dad picked up from the supermarket. Tart, firm Granny Smiths make a great pie, but usually I mix my apples – for example, throwing in a few mealier Macintoshes or Macouns for a bit of sweetness. This one-apple pie, however, came out great. I’ve started thinking over the years that apple pie recipes are actually complete bunk. There is no single great apple pie recipe, since apples themselves are such a huge part of a great pie and they can never really be standardized. The key is to learn to taste for texture, sugar, and acid and work with your apples as you go.

If that’s too much pressure you can start with another classic: chess pie. This pie is from the days when fruit wasn’t shipped around the country on demand – it’s made entirely out of pantry staples. The recipe I tried (out of my Southern Cook Book of course) came out a little weird – the middle didn’t set the way chess pie is supposed to, and it wound up being kind of like butterscotch goo with a bruleed sugar topping. That, however, did not stop it from being the first of the three Friday night pies to be devoured. I think I’ll try it again soon, and perhaps add more eggs to keep things together. The lack of setting might also have been due to the exigencies of Thanksgiving baking – the oven was still hotter than it probably should have been from cooking several pies and pans of root vegetables at close to broiling. I’ll report back on any experiments. In the meantime, here are some pictures and recipes…

Apple pie! I should give a nod to my dad for all these pie pics – his DSLR is responsible for the higher-than-usual quality of the photos on this blog. 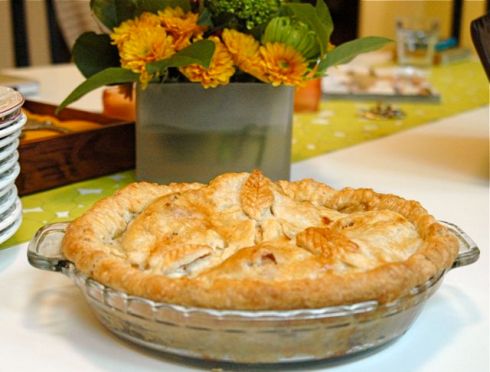 All the pies together! (From front: apple, chess, pumpkin) Sadly the tart was already gone and could not join the family photo. 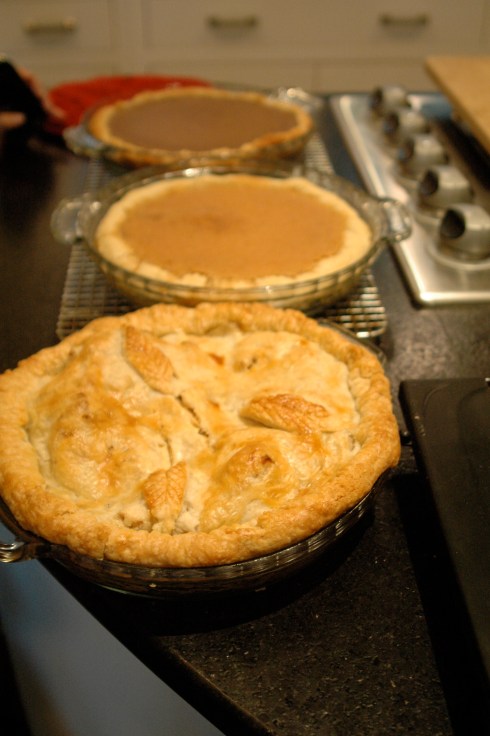 1. Preheat oven to 425 degrees. Roll one dough disk on a lightly floured surface into a 12-inch circle and place in pie plate.
2. Gently press dough into sides of pan leaving portion that overhangs lip of pie plate in place. Refrigerate while preparing fruit.
3. Peel, core, and cut apples into 1/2-to-3/4-inch slices and toss with sugar, lemon juice, spices and zest. Turn fruit mixture, including juices, into chilled pie shell and mound slightly in center. Roll out other dough round and place over filling. Trim top and bottom edges to 1/2 inch beyond pan lip. Tuck this rim of dough underneath itself so that folded edge is flush with pan lip. Flute edging or press with fork tines to seal. Cut four slits at right angles on dough top. Brush egg onto top of crust.
4. Bake until top crust is golden, about 25 minutes. Reduce oven temperature to 375 degrees; continue baking until juices bubble and crust is deep golden brown, 30 to 35 minutes longer. Transfer pie to wire rack; cool to almost room temperature, at least 4 hours.

1. Preheat oven to 325 degrees. Roll dough disk on a lightly floured surface into a 12-inch circle and place in pie plate.
2. Mix butter and sugar and simmer slowly, stirring, for 5 minutes. Remove from heat and let cool slightly, stirring constantly. Add eggs, one at a time, beating well. Add vanilla, salt and vinegar; mix well.
3. Pour filling into pie shell and bake for 30-35 minutes. Shake pie gently. It is done when the center quivers slightly.