Well, February happened. I had a cake recipe lined up after my last post…and then work exploded. I finally got some weekend time, though, and I’ve used it to see some friends, see some art, and, of course, to get some cooking done.

During the past weeks of craziness – and accompanying meals of ordered-in sushi – I’ve really missed my own home cooking. So, with my time this week I decided to hunt down something easy, tasty, and feasible for one person. The result: fast, delicious pork chops with beer-mustard sauce and gherkins. 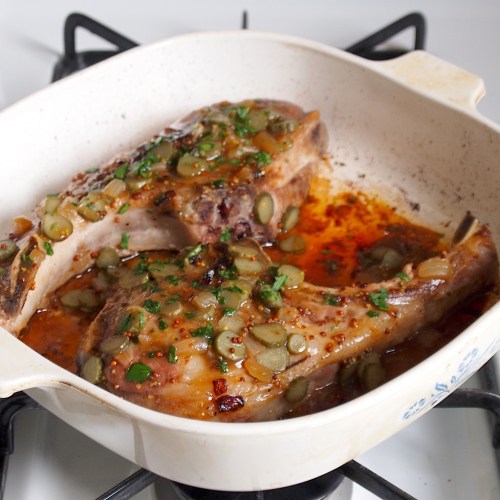 The pork chop idea started at Whole Foods, where I found some nice-looking local piggy parts on sale. 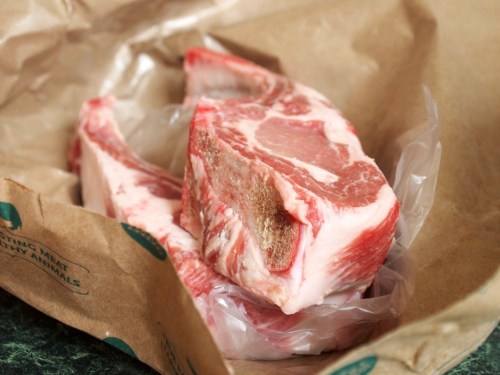 Pan-fried pork chops, along with chicken breasts of any ilk, are a classic Sad Single Dinner. To make mine awesome and un-sad, I resorted to The Gold Cook Book – with added inspiration from The River Cottage Meat Book. These resources yielded, respectively, sauce and cooking technique. Where The Gold Cook Book suggests a straight pan-fry for the pork chops, I decided to try Hugh Fearnley-Whittingstall’s pan-to-oven method.  This involved searing the chops quickly on the stovetop… 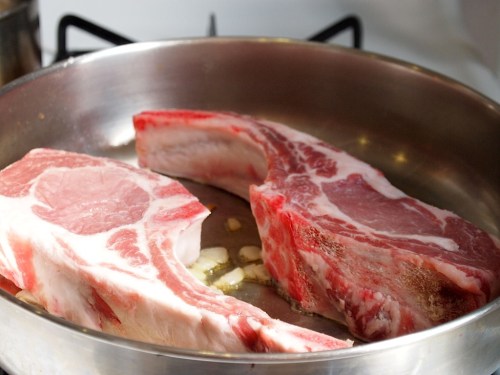 Then deglazing the pan, putting the seared chops in a pre-warmed oven-safe pan, and pouring the pan juices over.  I should mention, at this point, that the deglazing liquid I used was not one suggested by either cookbook.  The sauces in both recipes from which I took inspiration are wine-based; since I had no dry white wine in the house, however, I chose to use beer.  This substitution basically turned a French recipe into something closer to Belgian cuisine.  I was pretty happy about this – I actually happen to think beer goes even better with mustard and pickles than wine.  But I’m getting ahead of myself… 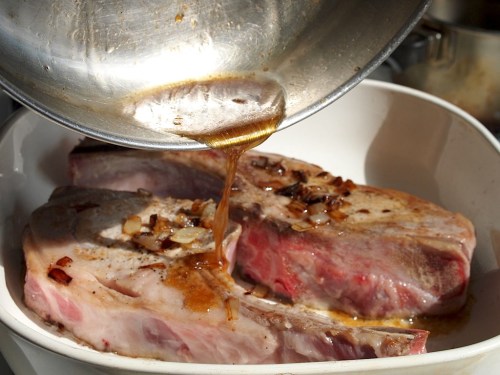 Before getting to either mustard or pickles I had to start with a technique foundational to both classic French cooking and Low Countries variations: makin’ roux.  I got the sauce started while the chops were roasting in a hot oven.  That’s the beauty of the River Cottage pan-roasting technique: it opens up time and stovetop space so you can tackle sauce and sides while the chops cook. 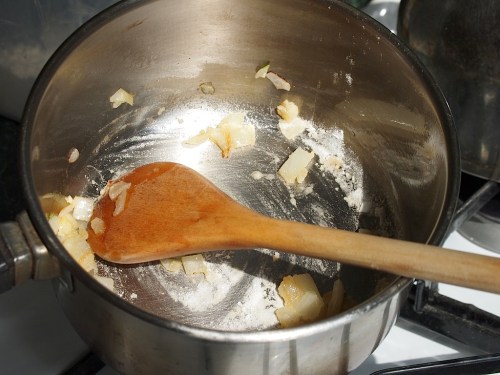 I toasted the flour with onions and fat, and added in beer (where the original called for white wine and stock).  Now we get to those pickles: I sliced up a handful of gherkins while the beer was cooking down. 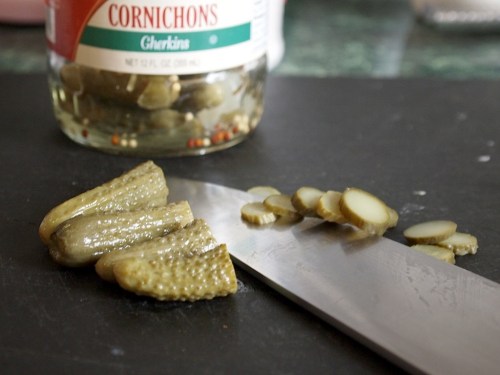 I reduced the beer sauce way down, and added mustard and gherkins at the end, as I was removing the chops from the oven.  While I think Louis DeGouy, author of The Gold Cook Book, might have intended that home chefs use a smooth Dijon mustard, I went for one with whole seeds. 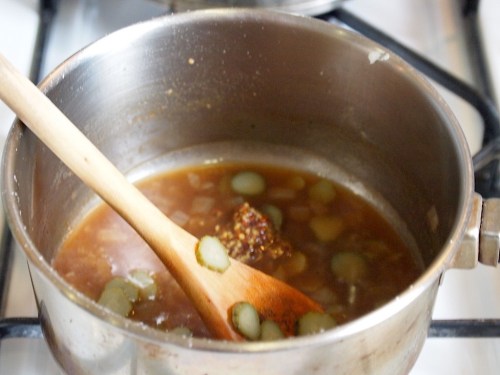 To finish the dish, I pulled the chops out of the oven (when they reached 140 degrees internal temperature) and immediately poured the beer sauce over. 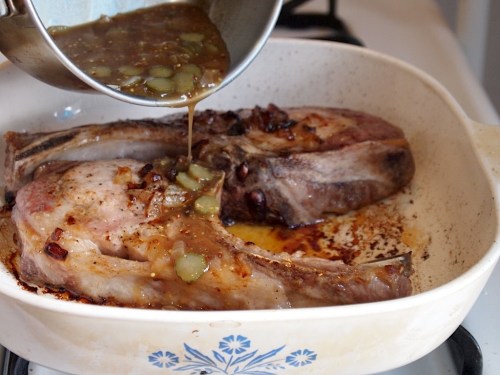 The finished product was delicious, porky, and tangy.  Moreover, because the dish’s ingredients already resemble those in a classic ploughman’s lunch, it is works well leftover.  Pork chops don’t reheat well, but this is so suited to being served cold that Chop #2 makes a perfect lunch the next day.  A perfect balance of taste and practicality.

1. Place an oven-proof dish in the oven and preheat to 425 degrees.
2. Heat oil in a pan over medium-high heat. Add half the onion and saute for a minute, until golden but not brown. Brown the pork chops in the pan for a minute or so on each side, seasoning with salt and pepper.
3. Remove the oven-proof dish from the oven and place the pork chops in it. Use about 1/4 cup of the beer to deglaze the pan; pour the juices over the pork chops and place them in the oven.
4. Roast the chops for 15-20 minutes, until they reach about 140 degrees internal temperature. Baste them halfway through with pan juices.
5. While the chops are roasting, make the beer sauce: Heat the butter and a little olive oil in a small saucepan over a medium flame. Cook the onion in the pan until translucent, then add the flour. Toast the flour-fat-onion mixture until it reaches a golden color and loses its raw, floury scent. Add the rest of the bottle of beer and bring to a boil. Season with salt and pepper, lower the flame, and cook until the liquid thickens and reduces to about half its original volume.
6. When the chops are cooked, remove them from the oven. Add the mustard and gherkins to the beer sauce and immediately pour it over the meat. Garnish with chopped parsley and serve.