So, I’m back in the States.  I’ve decided to finish out my Asia posts because I like the travel diary aspect of things, but I’m also going to include recipes in these last posts to round things out.  Thankfully, as I was flipping through my new book Authentic Cambodian Recipes, I came across a recipe for a terrine of ground pork and prahok (fermented fish paste).  August’s Charcutepalooza challenge – the first of the two I’ve missed – involved terrines; so, I’m killing two birds with one stone. 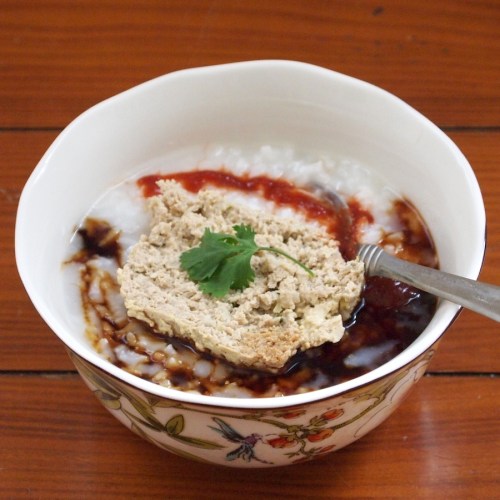 I served terrine above as a mid-morning meal with congee, a rice porridge eaten in many Asian countries (including Cambodia) for breakfast. Rice and prahok are two of Cambodia’s staple foods. In this poor country, many subsistence farmers grow rice and use prahok – made from freshwater fish – to add protein to meals. During the 12-hour bus ride Shanti and I took from Saigon to Siem Reap, we saw a lot of Cambodia countryside. It was dotted with rice paddies and palm-thatched shacks on stilts. When the sun went down, it became obvious few of these households had electricity. 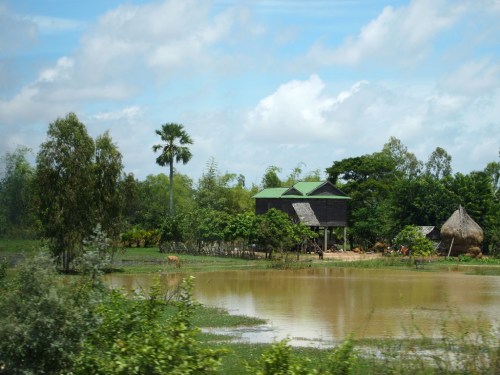 This made arrival at Siem Reap – the town next to the Angkor Temples – incredibly surreal; after 12 hours of tiny towns and rural landscape, streets of luxury resort hotels suddenly sprang up out of rice paddies. Because it was off-season, we got an incredible deal at one of these hotels (the Tara Angkor – highly recommended). It had an unbelievable breakfast buffet, which combined the best Eastern and Western day-starting delicacies. 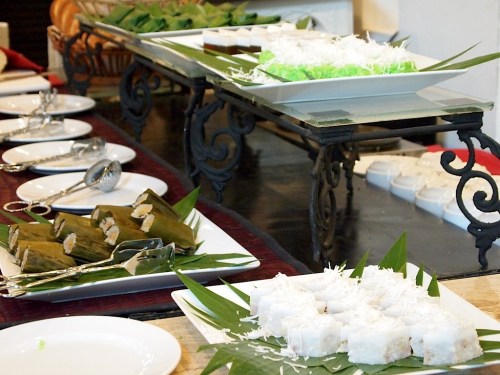 On our first day there, we biked around the central area of the massive national park in which the temples are situated. We decided to skip getting a guide, and to nerd out with an archaeologist-authored book I picked up. I got really into architecture and iconography, and loved dusting off long-dormant archaeological instincts – I was so proud I managed to spot beam-holes at one temple that indicated it had had a second floor.

Many of the temples had been restored in the middle of the twentieth century; my favorite, however, was the picturesquely decayed Ta Prohm, which was purposely left covered in strangle fig roots to give tourists an idea of the condition of the temples pre-restoration. 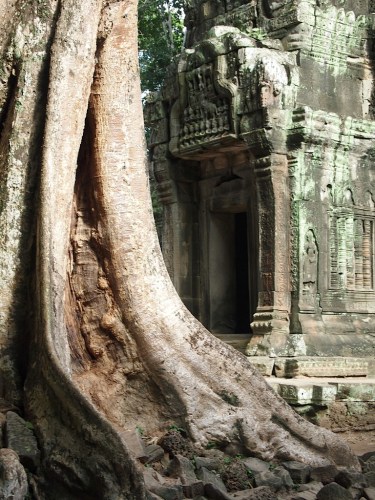 Evidence of Cambodia’s poverty presented itself even in the borders of the national park; each temple entrance was mobbed with children of about 9 or 10 trying to sell small souvenirs. Children also sat begging or selling incense in shrines at the top of many of the wats. 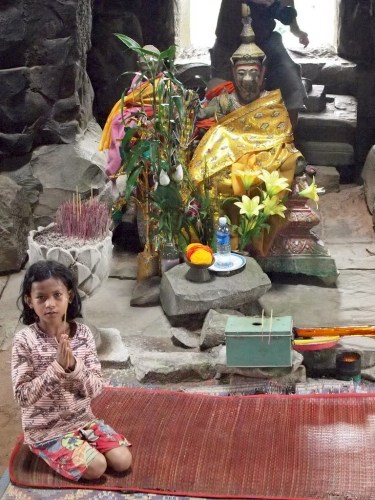 I puzzled long and hard over whether or not it would be helpful to buy; thankfully I came across helpful guidance in one travel book which pointed out that if these kids learn they can make money at the temples, they’re less likely to finish school. There are holes in this argument, but I eventually decided it was good enough that I’d save my pennies and give to an established charity. Please consider giving: the Cambodian Children’s Fund is well-reviewed.

The child-merchants actually seemed more of a general pattern of open use of the temple park; many local people apparently graze cows among the ruins. 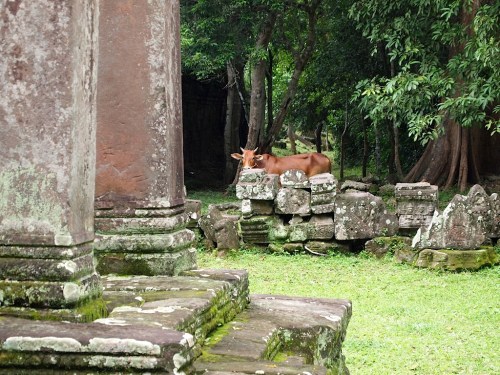 On our last day of ruin-touring, we even saw one gentleman fishing in a temple moat while his cow grazed nearby. 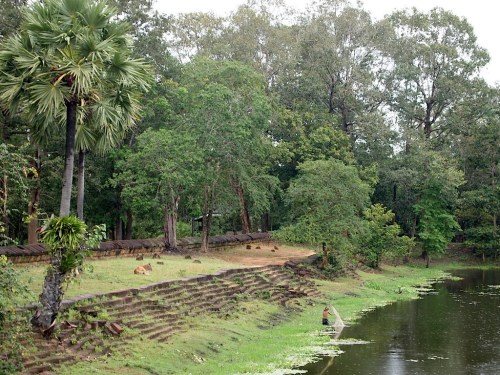 I must admit, before I give you my terrine recipe, that we spent the second half of that last day being totally decadent. Because Cambodia is so poor, dollars (the main currency there) go a lot further. Especially at spas. Shanti and I went to a gorgeous spa in Siem Reap town and got massages and, respectively, a wrap and a facial, for under $100. I felt like I was in one of the heavens depicted in bas-relief at Angkor Wat.

Many tourists pooh-pooh Khmer cuisine. I, however, was really into traditional black pepper-based curries. And prahok – which I tried at our first dinner in Siem Reap. Sadly, my hunt in Brooklyn Chinatown for this ingredient was fruitless. I did, however, turn up a Vietnamese equivalent. 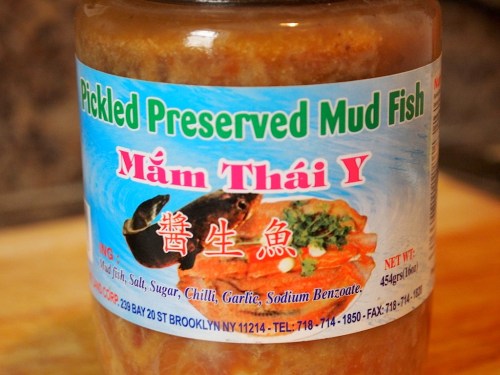 I love the salty, pungent flavor this seasoning adds to dishes. I’m not gonna lie, though: it kind of smells like butt straight out of the jar. I’m currently cat-sitting for a friend until my new place (in Fort Greene!) opens up October 1; the kitties went nuts when I opened that container. Cooking around cats, by the way, is kind of an adventure. 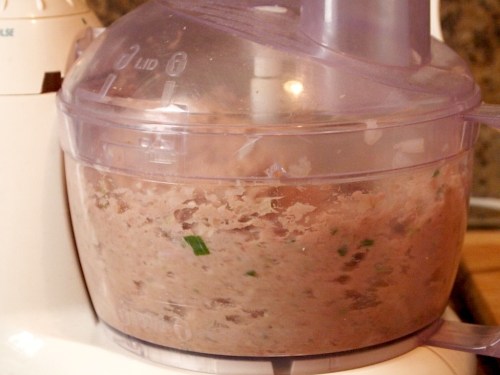 Thankfully, the smelly fish paste got blended right in with equally smelly onion and garlic – and some less pungent ground pork. This paste is blended with several beaten eggs. 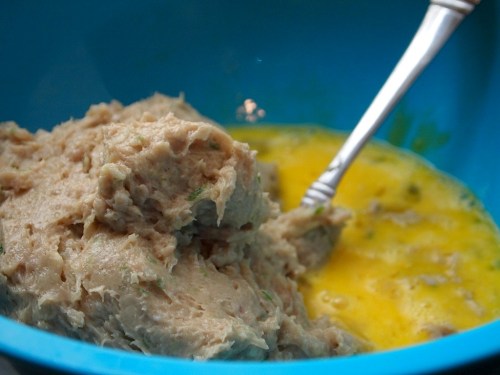 And then, just to up the fish ante, you toss in fish sauce. Along with salt, pepper, sugar, and the juice of three lemons. 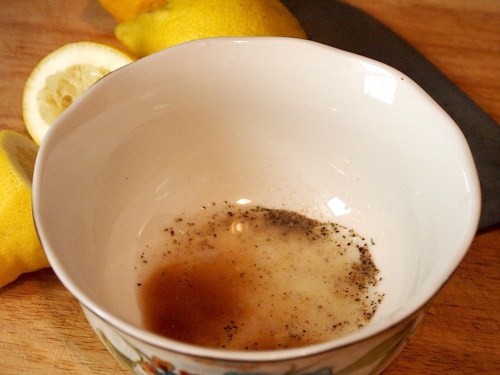 The resulting mixture has the texture of cake batter. I was sans terrine pan, so I tossed it in an aluminum loaf pan for the final step: steaming. 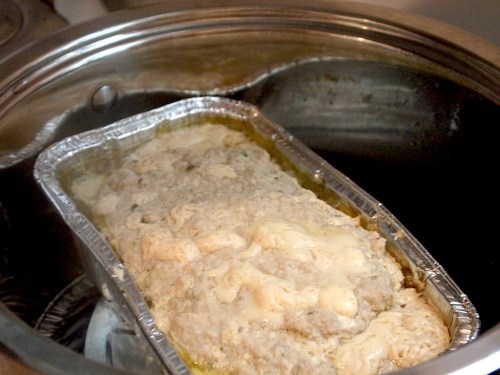 The end result was rather delicious though, as you can see, it broke a little. I tried to give some to the cats, but though the fish sauce was probably intriguing, they were apparently not fans of the onion flavor. Those felines are pickier than Jeffrey Steingarten on Iron Chef. I, however, will be enjoying another congee-and-terrine brunch tomorrow.

1. Blend the pork, fish paste, scallions, garlic, and onion in a food processor until smooth.
2. Beat the eggs in a large, chilled mixing bowl. Add the pork mixture, combine thoroughly, and add sugar, lemon juice and zest, salt and pepper, and fish sauce. Mix well, and add in the chives and cilantro last.
3. Pour the mixture into a loaf tin lined with plastic wrap. Steam for 30 minutes on stovetop, or place in a baking pan surrounded by 1-2 inches of water, cover the whole thing with foil, and bake for 30 minutes at 350 degrees. Allow the terrine to cool for 15 minutes before unmolding and serving with rice and veggies.