So, I remembered after Soup #1 why I don’t usually buy liver even though I really enjoy it…stores sell liver by the pint. They, really, really just want to foist as much of it off on someone else for a marginal profit, so they make it super cheap and let you buy three-quarters of a pound minimum.

I didn’t have the energy to tackle something that would require a lot of extra ingredients (like pate), so I settled on another soup – one I’d seen in Ed Harris Heth’s Country Kitchen Cook Book. The book has a section titled “The Winter Soup Pot” and filled with hearty Midwestern stews designed to keep you warm and your house smelling cheery at times when “the snowplow does not arrive for three or four days.”  I’m sure you’ll be seeing more of these soups soon – especially the German Beer Soup which the author’s grandmother was fond of serving with “a little fried blood sausage.” 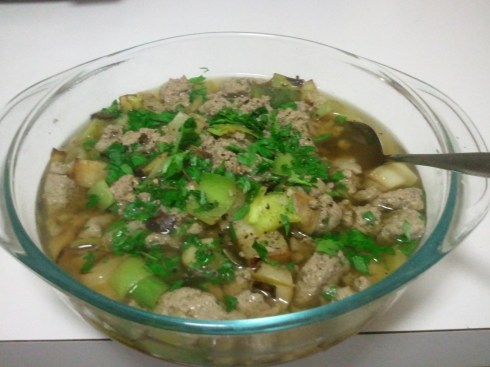 “Grind very fine 1/2 lb. chicken livers and mix with a beaten egg yolk, a slice of bread soaked in milk and squeezed dry, 2 T butter, 1 t each of chopped parsley and grated onion, 1/2 t salt, fresh pepper, 1 T flour and 1/4 t each of ground nutmeg and ginger.  Fold in a stiffly beaten egg white, chill, shape into very small balls and boil about 5 minutes in the broth, uncovered.  A little parsley fried in butter is also good in the soup with these.”

A few notes on this recipe…First, this is one dish where I decided to cut down on butter: liver is already high in cholesterol and the butter didn’t seem really necessary to bind the dumplings (that’s what the egg is for), so I just omitted it.  I also made this soup into a full meal by pouring the dumplings and the quart of chicken stock in which I boiled them over some veggies.  I prefer my veggies to be non-mushy and a little caramelized, so instead of boiling them in the stock I braised them in a pan while making dumplings.  Very good call, if I may say so myself.