When I was about ten, I went to a traditional Italian Feast of the Seven Fishes for Christmas Eve. Truthfully, there might not have been exactly seven fishes, but there were many courses and there were many old Italians; the dinner was held my grandmother’s best friend Marie. Marie lived in the same Florida development as my grandparents, so I always saw her when I went to visit them; I don’t think I realized until I was about seven that we weren’t related. She is a fabulous cook, and her Christmas Eve banquet was one of my formative food experiences; I remember sitting through antipasti, pastas, fish, cheeses, desserts, thinking “I want to be able to do this one day.” One of the antipasti served at the start of this dinner was a traditional Sicilian pickled eggplant – melanzane sott’olio. I was not a huge fan, but my parents went nuts over it and my mom got the recipe. It languished in her recipe box for years, but since I’ve got a more developed palate than I did at ten, and I’ve been getting into pickles, I decided to try it out… 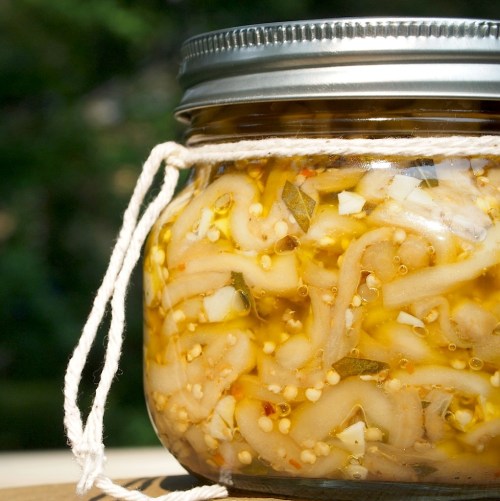 These pickles are delicious. Incredibly pungent, and really flavorful. The batch above was actually my second; I tried this once with regular eggplants, and found they just had too many seeds. It stands to reason: Italian eggplants are much smaller and slimmer than the variety we usually get here in America. You can often purchase them here, but they’re pretty expensive. My advice: use Chinese (sometimes called Japanese) eggplants. If you can’t find them, use the regular kind, but try to find some modest-sized ones. 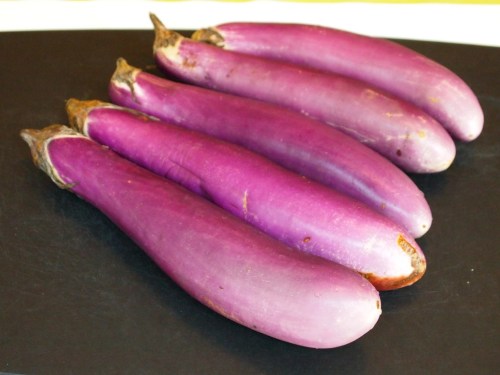 I love to keep the skin on my eggplants when I’m roasting or grilling them, but that’s simply not doable with pickles. Peel those puppies down. 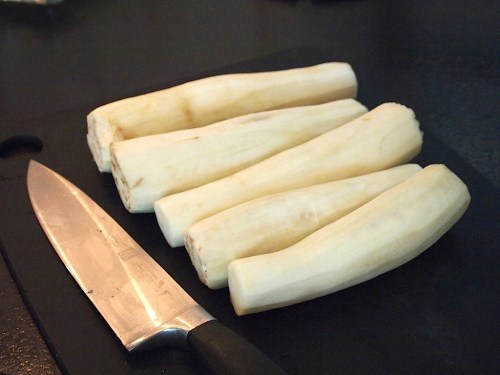 A confession: I’m also usually lazy about salting eggplant. I know it’s supposed to take the bitterness out of the eggplant, but I usually cook this vegetable with flavorful sauces, and kind of enjoy the way the bitterness undercuts things. Again, not doable with pickles. You have to slice these eggplants into matchstick strips and salt them. 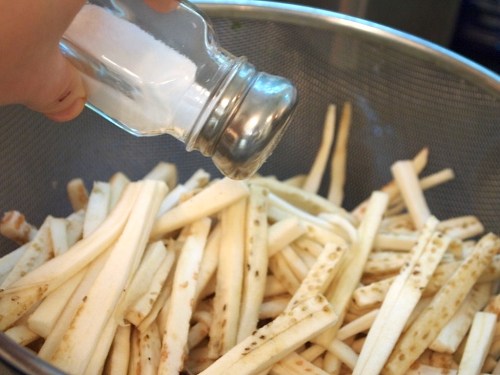 I didn’t show this above, but it’s also a good idea to put a weighted plate on top of the salted eggplant to really hasten the draining process. The more moisture you press out, the more vinegar the strips soak up, and the faster the pickle. I’ve made this two ways – with cider vinegar and white wine vinegar. Both are fabulous. You’ll need to use a full bottle of whichever you choose. 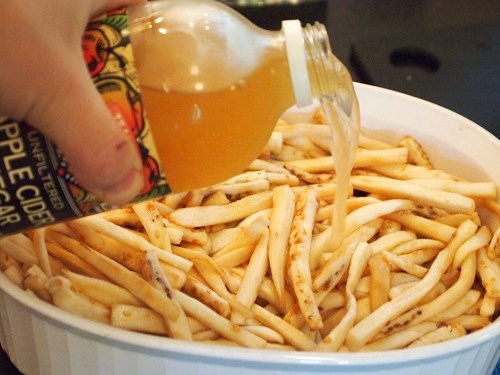 The real work is done now: you just let the eggplant soak for several hours. I like to stick around to turn it occasionally. 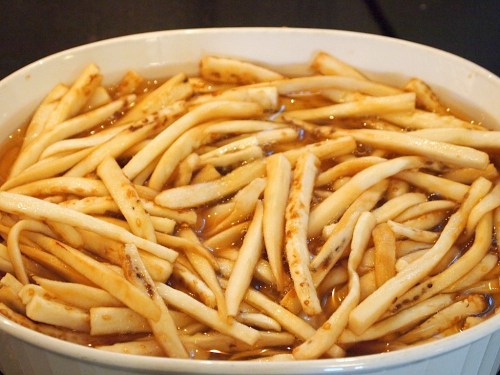 This is the cool part: the vinegar breaks the tender eggplant flesh down, and basically cooks it. It’s like eggplant ceviche. 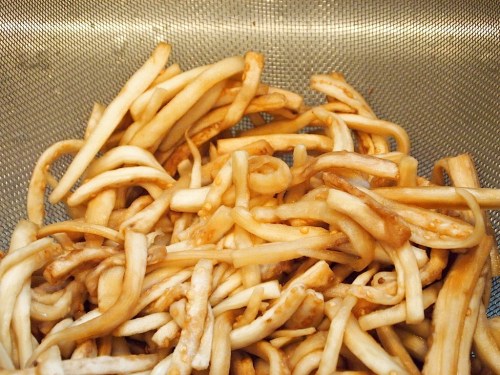 When the vinegar is squeezed out, you toss the pickled eggplant strips with garlic, herbs, and oil. I actually monkeyed with the traditional recipe here: Marie uses only garlic and bay leaves, but I decided to try tossing in some fresh oregano and red pepper flakes. Not to be immodest, but…I made a good call. The extra spices added dimension to the pickle flavor. Don’t use dried oregano for this, though – the herb has a very different character in its fresh and dried states. 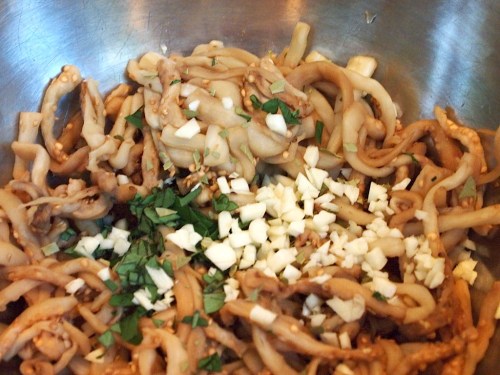 And then…I jarred and sealed it. A note about canning safety here: this recipe is not USDA-approved for long-term storage if you’re only heat processing (instead of pressure canning). I heat-processed because I was transporting this jar and didn’t want garlic oil all over my life. And because the heat cooks the eggplant a little more, and really binds flavors. You can make this recipe for short-term refrigerator storage and not seal it at all; in this case, just put it in a jar and let it mellow for a few days before using it. For longer storage…the USDA fear here is botulism. It’s your call whether you want to risk putting a jar up for a while. 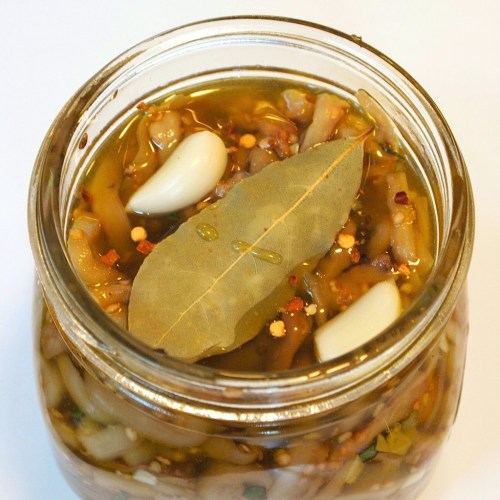 PS – I’m SOOOO done with the bar exam. Two days of testing in a cavernous convention center, and I don’t get results until November…but hey, I’m on vacation now! Lots of delicious things to come.

1. Soak sliced eggplant in cider vinegar for 3-4 hours. Eggplant should just be covered.
2. Strain eggplant and squeeze out all of the vinegar carefully.
3. Toss with olive oil, garlic, crushed bay leaves, and salt and pepper to taste.
4. Place in jar, add olive oil to cover, and place a whole bay leaf on top for flavor. Cover and keep in the fridge; try to wait about three days before digging in, to let the flavors meld.