I’m honestly really not sure what makes these peas “Indian.”  As a purely historical matter, there was trade between Rome and India (I’m lazy – if you want more info, check out this reputably-researched and -sourced Wikipedia article).  The weird thing about this dish, though, is that it really isn’t very different from other dishes in Apicius’s collection: the typical Roman flavor profile is based heavily on leeks, cumin, coriander, sweet wine, pepper, garum, and garlic.  These Indian peas have a good number of those ingredients, and not a ton of others.  But then, I don’t know what 4th century Indian cooking was like – or what regions the Romans dealt with.  I’m guessing they weren’t bringing takeout containers of chicken tikka masala back to Italy, though.  Anyone know more about ancient cooking on the subcontinent?

Anyway, just a few things about Roman cooking.  First, I always grind my spices by hand when I do it, to give the right taste and texture.  Here are my cumin, coriander, oregano, peppercorns, and anise (I substituted the last for lovage, which I don’t have). 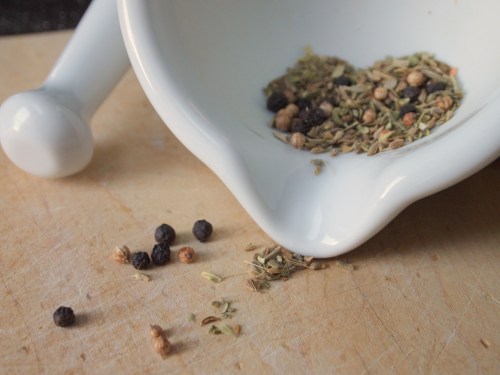 The final dish turned out beautifully: fresh, a little sweet, a little spicy, and very different from most flavor profiles we usually deal with.  Sadly, this post is in memoriam of both peas and bowl, because I’m a huge spaz and dropped my dinner when the FreshDirect delivery guy rang the bell.  On the positive side: it was a cheap, healthy, and easy meal, and I’m sure I’ll try it again.  And perhaps even foist it on friends as part of a Roman banquet… 1. Grind all the spices together. Boil the squid for 40 minuted, until tender, and set aside.
2. Heat oil in a skillet over medium-high heat and add the leeks. Toss the peas in when they start to soften, and mix in the the spices, then pour over the wine, honey, and fish sauce. Add the squid and cook for 5 minutes, until most of the liquid is boiled off.

**The original recipe calls for sweet wine, but a light cooking wine mixed with honey worked well as a substitute.