I am the Queen of False Promises. Broken Promise #1: More frequest postings, post-bar. Broken Promise #2: Monthly charcuterie. I’ve been running around crazily and prepping for my 3-week trek across Southeast Asia…and I realized I had no time this month for Charcutepalooza, and that when next month’s post is due I’ll be stumbling off a 20-hour plane right from Hong Kong with a bellyful of Xanax (I hate flying).

The good news: I’m bringing my camera and computer to Thailand and Vietnam (don’t worry, all my hotels have safes), and I’m going to try to do posts for each of my five main destinations. It’ll be epic. In the meantime, I have two recipes for you – one from travels of yore, the other from The Complete Greek Cookbook. First, I bring you: a classic Greek Salad, or χωριάτικη (horiatiki). 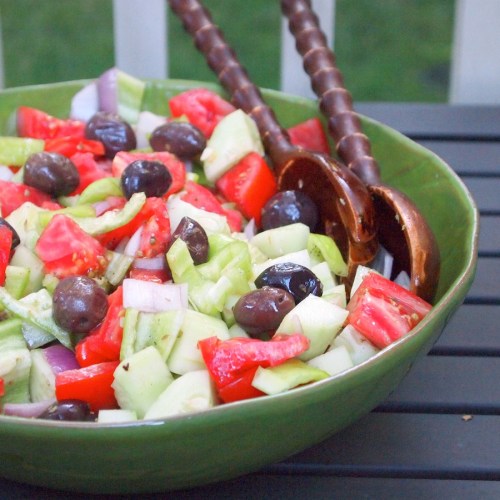 The key to this salad: everything in it is from the farmer’s market. I went nuts for tomatoes, and this was the result. 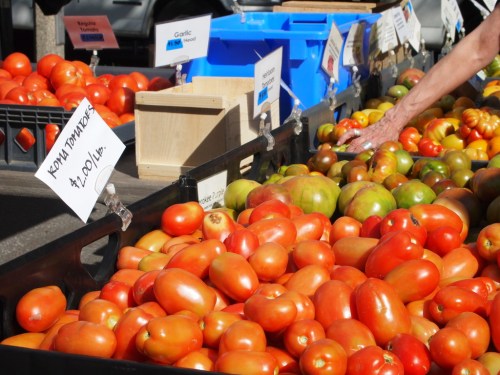 Greek cuisine, you see, is highly ingredient-based. Those feta-laden concoctions labeled “Greek Salad” in most delis don’t even approach the horiatiki I learned to make while digging in a tiny Greek mainland town. Most of the components might be the same (though many Americans are shocked to learn feta is actually optional), but the tomatoes are usually anemic and the cucumbers tasteless. 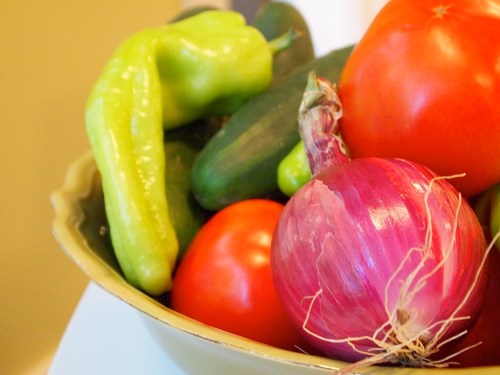 Horiatiki means “rustic salad” and it’s best when it’s just that: roughly chopped farm-fresh vegetables drizzled with olive oil and sprinkled with salt, pepper, and dried oregano. The combination of veggies – tomato, cucumber, peppers, and red onion – is perfectly balanced and highlighted by the oregano.

This approach carries over to Greek meat cookery, as in the recipe I found in The Complete Greek Cookbook for grilled/broiled pork or lamb chops. The recipe starts with a simple rub, based on mint, oregano, and thyme. 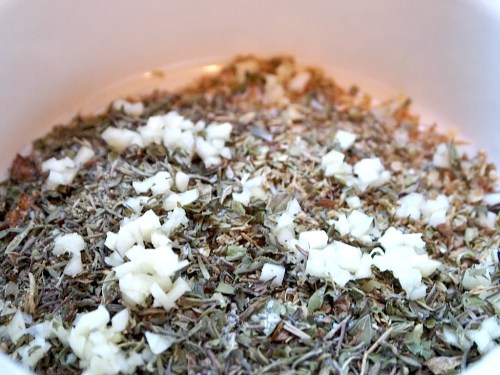 I chose to get newfangled and follow instructions in Cook’s Illustrated for brining my chops before grilling them. 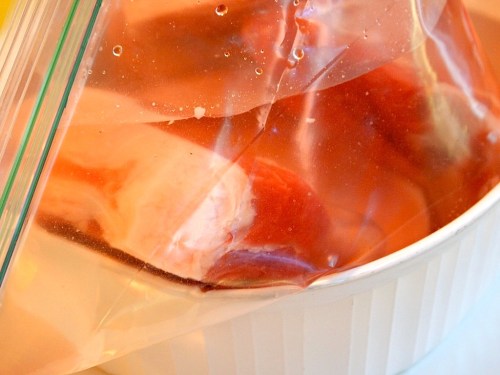 After brining, I kept it simple: I oregano-ed up those chops, and slapped them on the grill. 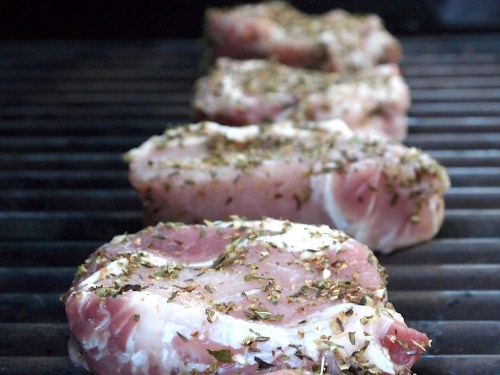 The final touch: fresh lemon juice. Greeks don’t just reserve lemon for fish: they use it to cut meat dishes as well, to great effect. Lemon is the perfect counterpart to oregano, ever popular and present in Greek cuisine, and it also balances out olive oil. These seasonings form a strong triumvirate which meshes well with fresh, flavorful seafood, meats, and vegetables. 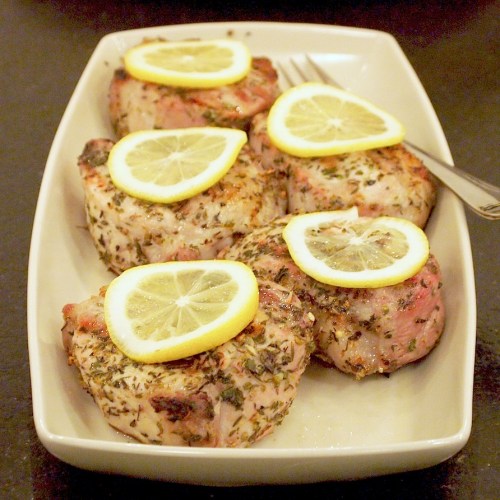 So, next time you’re looking for a simple summer meal with farmer’s market or CSA produce, take your cue from the ancients, the original locavores: think Greek and traditional and reach for the olive oil, oregano, and lemon.

Make sure the veggies are fresh, and at room temperature (not chilled). Toss all ingredients and serve.

1. Mix the kosher salt and sugar in a gallon or 2-gallon Ziploc bag. Add 2 cups water and shake to dissolve. Place the pork chops in the bag and add enough water so the brine covers them. Put the bag in a bowl (making sure the chops are still covered) and let them rest for an hour in the refrigerator.
2. When the hour is up, pull the chops out of the brine, rinse them, and pat them dry. Mix the oregano, mint, thyme, pepper, and salt, and rub the chops with these spices. Let them sit at room temperature for 30 minutes.
3. Broil the chops for 5 minutes a side, or grill according to your grill’s instructions (probably about the same timing). The chops should reach an internal temperature of 135 degrees Fahrenheit. Cover them with foil and let them rest for 5 minutes before serving.
4. Serve each chop with a slice of lemon; squeeze juice over before eating.