I love all dumpling/bun variants – even the spaetzle type which have no filling. I am not picky – steam or boil a blob of dough and I will go nuts for it. So, when I got an invite to a potluck brunch and then came across a “Dumpling” section in my 1960s Gourmet Cookbook and found some sweet-savory types I went through the roof. And then I calmed down and made…Zwetschgenknoedel!

OK, so technically I didn’t make proper Zwetschgenknoedel: these German dumplings are technically supposed to be stuffed with fresh prune plums. I misread the recipe in haste and bought dried prunes. Thankfully, prunes are the moistest of all dried fruits, so I figured the wrinkly version would do fine. I even soaked them in a bit of triple sec to moisten them up a bit more (you might have noticed I have a penchant for boozy cooking). Google yielded a number of traditional German takes on these plum poppers: some have yeast dough, some use quark or cream cheese…

The Gourmet Cookbook uses a potato-based dough. This is why I love vintage cookbooks: I’m not sure whether this is super traditional or whether this is Gourmet trying, in its 60s way, to be cosmopolitan – whether this is the German equivalent of a Chop Suey recipe. Anyhow, my dried prune potato dumplings turned out pretty tasty. The one problem was they they were stuck in a kind of limbo between Sweet and Savory. I’d advocate adding more spices and maybe rolling the prunes in flour instead of sugar…and then using these as a tasty unusual accompaniment for a sauce-heavy meat dish. They’d go really well with a red wine-based pot roast, for example. 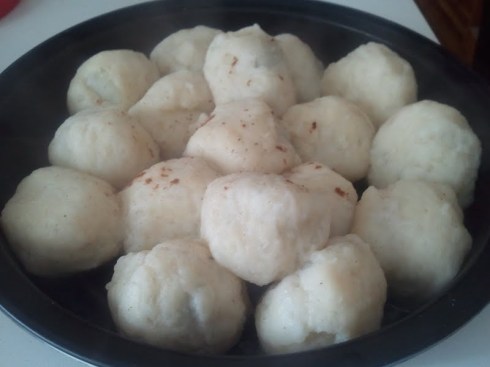 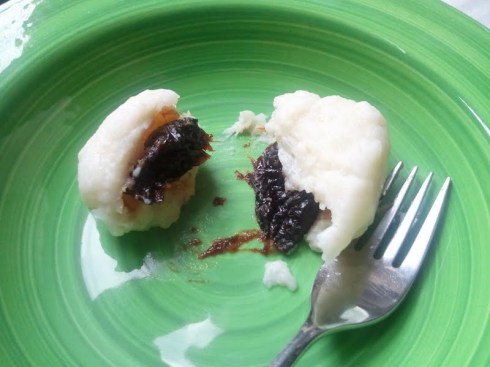 1. Place the prunes in triple sec to soak. In the meantime, peel, boil, and mash the potatoes.
2. When the potatoes have cooled, add the egg, 1/2 c. flour, nutmeg, and salt. Mix with a fork, then turn out onto a floured surface and knead until well combined. The dough should feel smooth, not sticky; add more flour (a tablespoon or two at a time) if it is not cohering properly.
3. Flour your hands. Take a 1 1/2-inch ball of dough and flatten it in your palm to form a 1/4-inch thick disc. Roll a prune in the spice-sugar mix, place it in the middle of the disc of dough, and pinch the edges of the disc shut to form a ball. Repeat until either the prunes or the dough are used up.
4. Cook the dumplings in salted, boiling water for 10 minutes.
5. Drain, toss with a little melted butter, and serve as desired while warm.