Charcutepalooza has been trucking along for four months now, and I’ve had an awesome time with four delicious challenges. OK, maybe it’s more accurate to say I’ve had an awesome time with three, and an interesting time with one: I have a great talent for messing up the oh-so-simple duck prosciutto with which we started. I’ve tried twice and have yet to make a successful prosciutto. Enough of my woes, though. I’ve had enough success and gotten excited enough about this whole business that I started asking myself: Why?

Why am I doing this? Why have I gotten so incredibly into it? Why do I find it so unbelievably thrilling to get down and dirty with large chunks of meat that I devote time, money, and precious space in my under-sized Manhattan fridge to this? Why do I lavish precious time and money on expensive, intensive meat projects? Why has from-scratch deli become my hobby obsession instead of, say, knitting? You may have guessed I’m going to settle in for some philosophizing. I’m going to intersperse photos from April’s Smoking Challenge BBQ pulled pork adventures amongst my thoughts to keep you entertained. A bargain: food for thoughts. 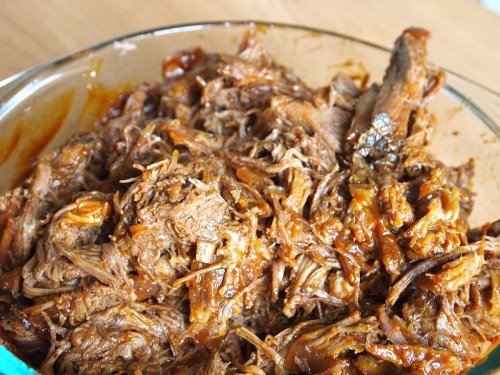 I actually have tried knitting, and my needles are sitting unused on a shelf right now, while my little wine fridge-turned-curing chamber is getting quite a workout. It’s sitting idle at the moment as I concentrate on this piece of Boston butt, but I’m going to be setting a new round of biltong up soon. 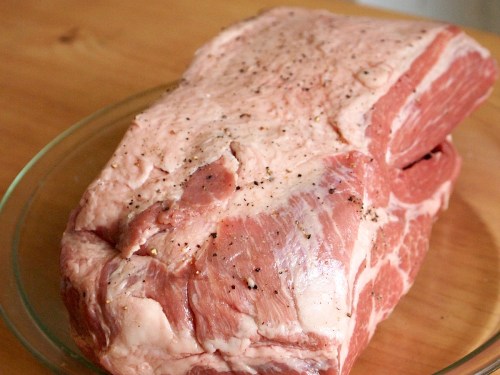 To start, I seasoned my 4 lb. Boston butt simply, with salt and pepper

This is the first “why” that I found for Charcutepalooza: sometimes you just can’t get things, or can’t get them easily, and if you want it you just gotta do it yourself. Or sometimes you can cut cost by DIYing, as I found with a salmon experiment last month. 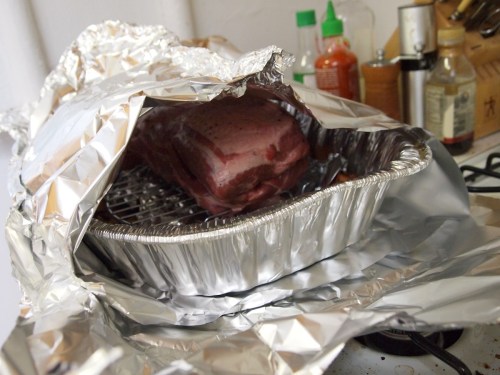 I smoked my pork in a makeshift Cameron smoker, cobbled together from a large aluminum pan, a rack, and heavy duty foil. I started the pork on the stovetop, but cooked it the rest of the time in the oven at 225 degrees to maintain a steady temperature.

This why—“DIY as cost-saver”—made me think of a wonderful response, by Doris and Jilly Cook, to last month’s New York Times “DIY Cooking Handbook.” These ladies did a truly wonderful job of highlighting the fallacy of slapping the labels “DIY” and “local” all over the place, indiscriminately, without concern for fundamentally different motives and rationales for at-home preparation. 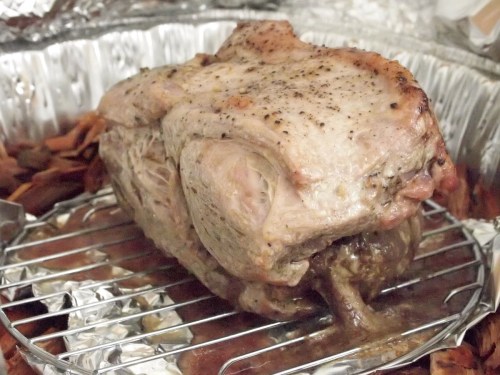 You can see the chips better here: I used apple and cherry to get a nice fruity smoke. After several hours smoking in the oven, this piece of pork filled my house with an intense, earthy, delicious piggy aroma.

“DIY,” they point out, is a concept closer to artisanal creation—hand-crafting components to control content and flavor. Real, local DIY, on the other hand, has a more primitive bent: it focuses on making a harvest last, and on conserving resources. 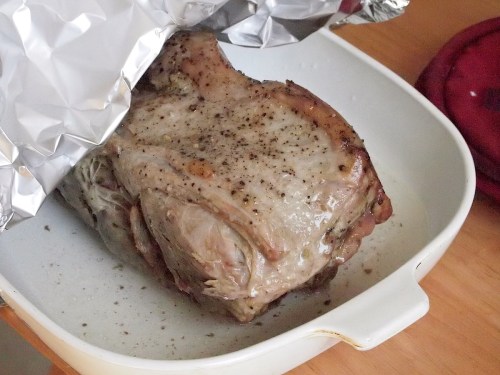 I then put my pork shoulder up to braise, in a corningware with a little water and a foil tent. Again, very simple: just the meat, with water, salt, and pepper.

The various Charcutepalooza challenges, I’ve found, have alternately spoken to aspects of each of these DIY rationales. Where I’m happy to have packed onions away during the brining challenge, I also loved exploring the nuances of flavor I found in February’s home-cured bacon from locally farmed pork. 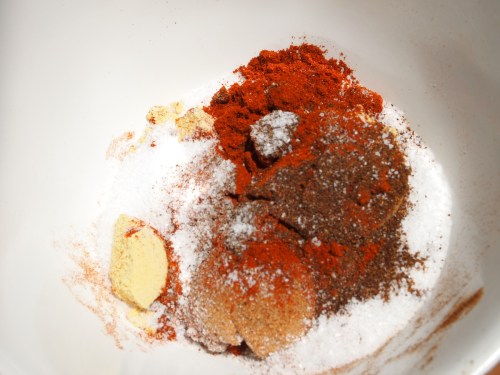 While the pork was braising, I took care of the main source of flavor: the BBQ sauce. I used Michael Ruhlman's recipe from Charcuterie. In the bowl of spices above: paprika, dry mustard, dark brown sugar, kosher salt, and cayenne.

My interest in preservationism, I realized, comes from my interest in the past. As a lapsed archaeologist, I have an ongoing and vested concern in keeping history alive. If you’ve read my Ides of March Banquet series, you also know I have an occasional liking for living history (I’ve stayed clear of reenactments so far, but I did make my own Regency dress for a Lizzie Bennet costume a few years back). 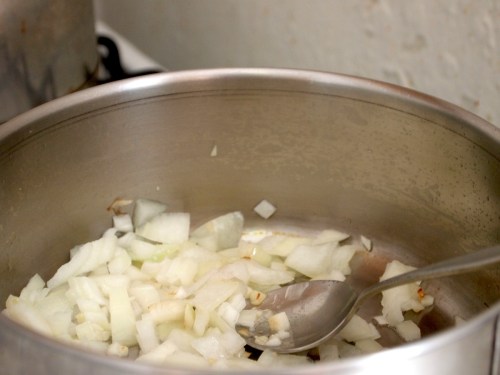 I cooked up some onion for the sauce.

It’s a no-brainer to say “I like artisanal food cuz of the flavaaazzz.” And while this may be true and flavaz may be awesome…I realized I really like making stuff from scratch because I am a total control freak. I’ve let go of a lot of this tendency in most areas of my life; I even have a Marcus Aurelius quote tattoo that basically says “Chill out, bro” in Ancient Greek. 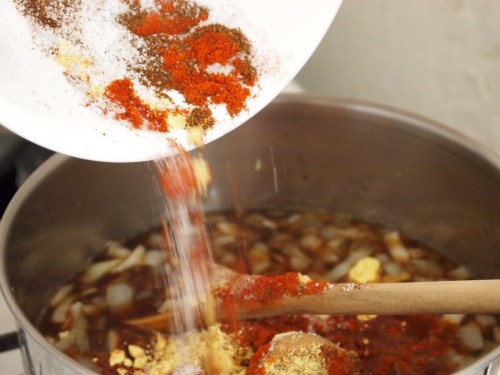 And I added cider vinegar, Worcestershire sauce, and the spices to the onion and garlic.

This seems to have made me seek more and more control, however, in my food: I’ve really found a liking for taking a meal, not from soup to nuts, but from hand-picked nuts to nut soup with homemade broth. And figuring out exactly which elements I can manipulate to get a dish where I want it. This isn’t to say I don’t cheat: I do use canned broth, and similar conveniences when I’m strapped for time. 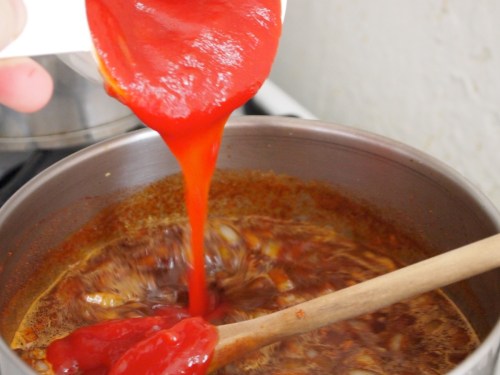 After spices, I added some ketchup, which thickened things up nicely.

My real impetus for Charcutepalooza: I love going through a process, though, to get down to the “whys” of the end product I’m eating. Both the historical and the flavorful “whys.” 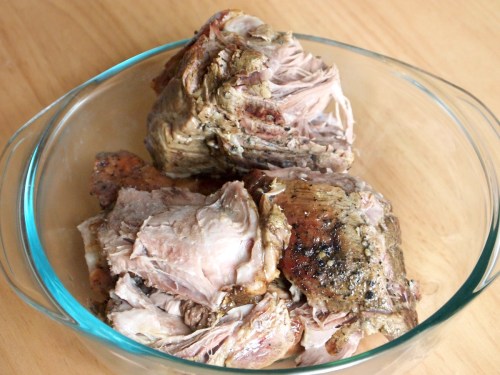 Finally, the pork was ready after a total of 7 hours smoking and braising. It was so tender it fell apart as I lifted it out of the braising pan with tongs.

Charcuterie is perfect for this: normally an average reaction to it involves a pretty simple brain-wiping, drool-inducing, caveman-like “YUMMM.” Charcutepalooza challenges, however, force us to rewind from that “yum” and look at the time and elements that come together to craft it. 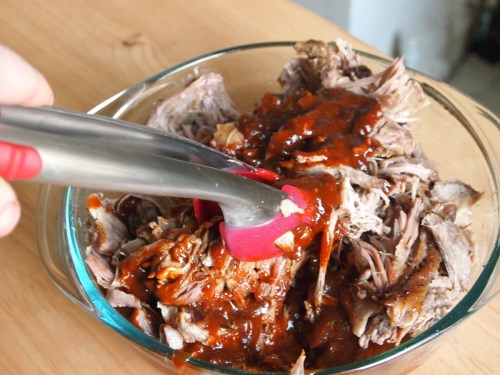 I poured the still-hot sauce onto the still-hot pork and tossed it all up to create the delicious, sweet-tangy-porky pile of meat you saw at the top of this post.

And as the months go on, I’m sure many of us are starting to see common threads that run through techniques (“Oh! This pickling spice stuff is good to have around, eh?”), and to get more of a hang of things like selecting and working with meat. We’re not even halfway through our Year of Meat and I already feel more confident in my knowledge of cuts, marbling, and butchery.

I’ve never had any squeamishness when it comes to working with meat—mammal or poultry: I vividly remember bouncing up and down around age 8 and asking my mom if I could examine chicken innards while she was cleaning a bird. As I ranted in comments on a great post from Winnie of Healthy Green Kitchen a couple of months ago, though, one of the most appalling things I’ve ever heard anyone say was, “I only eat chicken breast because I don’t like to think about the fact that I’m eating an animal – the drumsticks freak me out.” I usually pride myself on willingness to get up close and personal with my meat. 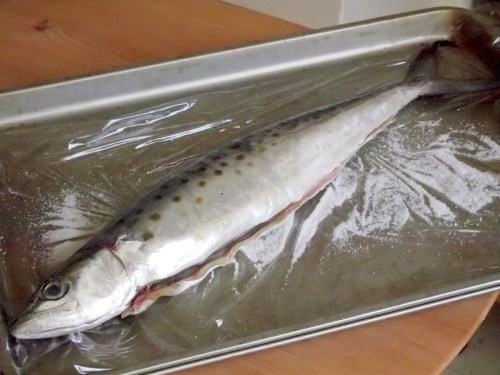 My mackerel, in all his glory, being salted before smoking.

So, as I started exploring the “hows” of curing, I had to be honest with myself: I’m fine up to my elbows in a pig, but…I just can’t handle fish. When I finally acknowledged this, I decided I had to address it. I womanned up and bought this lovely Spanish mackerel to smoke. Ain’t he a beaut? 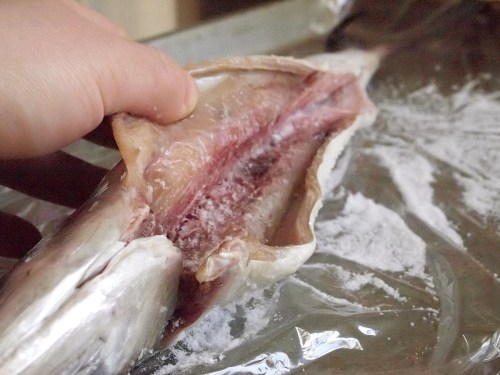 Talk about getting over squeamishness: I had the Whole Foods fish guy clean the mackerel so it would stay fresh on its journey home, but I definitely got into the fish - literally, as I made sure to distribute salt inside its body.

Yes, I have a disturbing tendency to personify my food. Back to Fish Issues…I find fish perfectly lovely on the outside or in fillet form, and I’ve always been alright picking away a little at a steamed fish in a Chinese restaurant. I’m also a huge fan of shellfish, and am always up for cracking a lobster open. 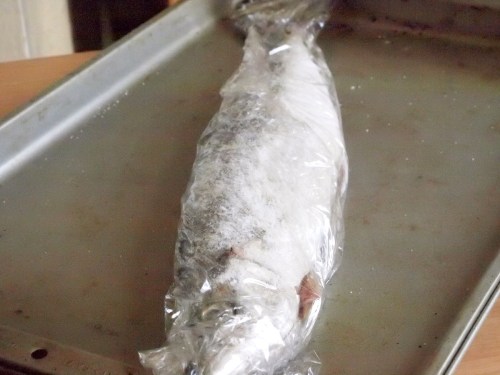 Once salted all over (with kosher salt), I wrapped the fish up and let it sit in the fridge for 40 minutes.

When I was a kid, though (hopefully one of my parents will comment and remind me how old), I had the misfortune to find a parasite in a piece of fish I was eating. This little worm in my fillet brought too much reality of life, food chains, and the non-sterility of food crashing down on my young self. 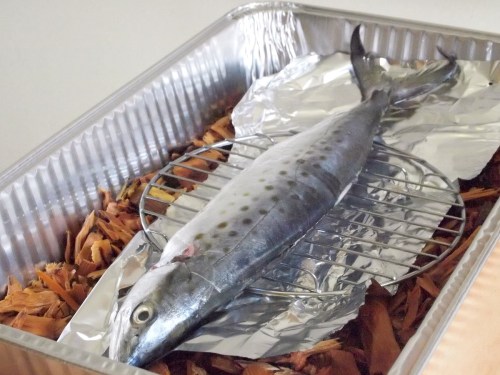 I used another makeshift smoker, and filled it with apple and hickory wood.

I vividly remember getting very, very upset, refusing to eat anything else at dinner (possibly puking?), and then curling up on the couch to watch Back to the Future 3. While Marty McFly helped me forget my immediate trauma, it took me years to eat a piece of fish without looking at each bite to check for worms. 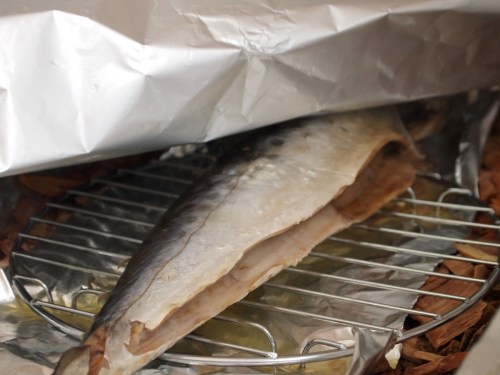 The fish was gorgeous after 40 minutes in the smoker on the stove: I could see smoke coloring around the edges, and the flesh was flaking.

I was a bit of a hypochondriac, to boot, and somehow developed a fear of choking on fishbones. OK, not “somehow”—I know very well that this had its root in the scene of Amadeus where Salieri’s dad chokes on a fishbone. The funny thing? My time working with meat for Charcutepalooza has given me extra confidence figuring out “how animals work.” It was a simple matter to work out this mackerel’s skeletal structure and clear flesh from bones with a fork. 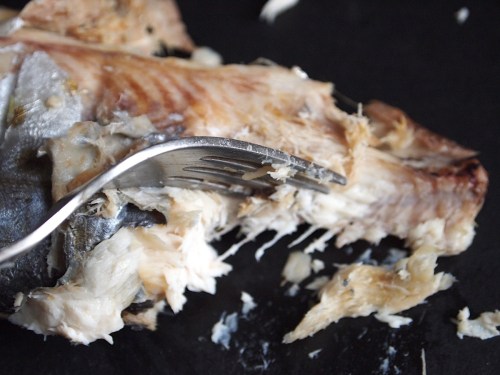 I pulled pungent, flaky smoked mackerel away from bones with no problem.

So, in addition to exploring how food works, and the history of how we eat, I’ve been able through all this work with meat to overcome a little anxiety and hypocrisy. In the “how things work” category I even started getting a little adventurous: I tried to smoke some cheddar. 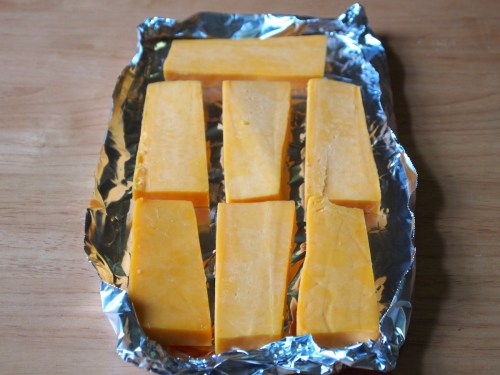 Sadly, the cheese failed epically because I forgot to put ice in my hot smoker to cool things down. Curiosity and control, though, are already pressing me to try again. In the meantime, thanks so much for taking this little meat-centric journey with me. 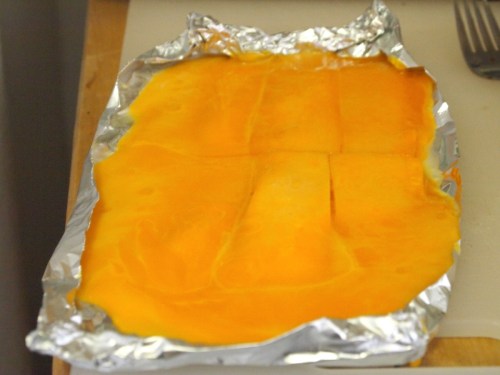 Thank god I took the internet recommendation for a foil boat. Fail.

I rescued some of that gooey cheese, because the smoky cheddar flavor was too good to pass up. And so, I leave you with my resultant artisan-frugal-semi-local sandwich: an Onion Cheddar Pulled Pork Tartine. 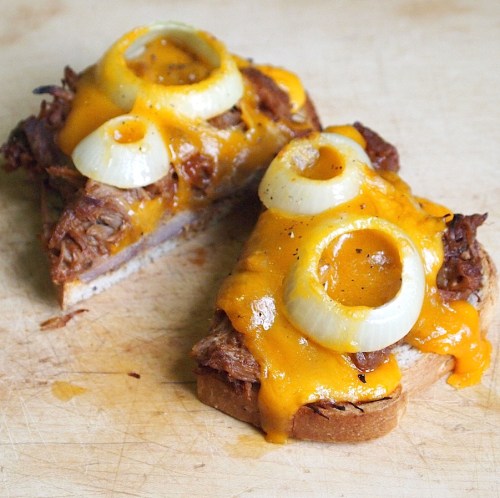