First off, I wanted thank you all for the really sweet and supportive comments I’ve received over the past couple of weeks. I’m getting down to the wire (the bar exam is on the 26th and 27th) and I’ll soon be back to posting and commenting with regularity.

In the meantime, I have a thank-you gift: my latest Charcutepalooza creation – mortadella. 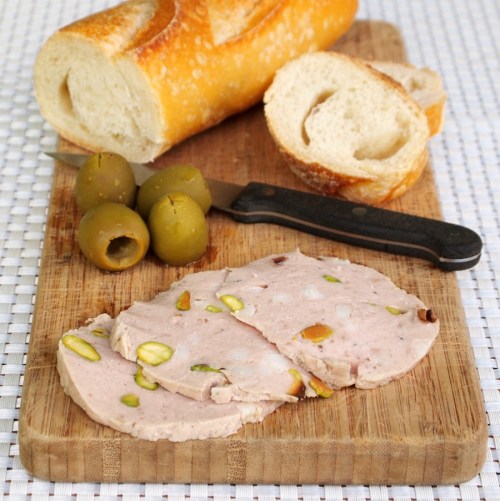 Mortadella, for those of you not familiar with it, is an emulsified sausage native to northern Italy. What, bologna, you ask? Well…sort of, but awesomer – mortadella is from Bologna, but it’s fatter and more flavorful than the stuff from Oscar Meyer, and is packed with fun things like pistachios or (occasionally) olives.

I was a weird kid and hated cold cuts (this caused no end of problems for my mom when it came to packing lunch); however, I would go nuts for mortadella. Whenever we made trips to Federal Hill (Providence’s Little Italy), we’d pick up salumi at a store called Tony’s Colonial; I loved the panettones and sausages hanging from the ceiling, and the cases full of cheeses and olives. Though I wouldn’t touch a regular smoked turkey sandwich, I adored the soppressata and mortadella we got there: I guess I was destined from an early age to be a sucker for finely-cured meats.

I was really excited to try mortadella for this month’s challenge because of my history with the forcemeat. Mortadella and I, however, were not fated to have a smooth ride: this month, I had my first serious Charcutepalooza mishap. The culprit: beef bung.

I’m not squeamish, but I was really not fond of this type of sausage casing from the moment I started working with it. Technically, bung is called a caecum; it’s a “blind stomach” situated in the middle of the lengthy bovine digestive system. In actuality, in smell, shape, and texture, bung is reminiscent of a giant condom used by an elephant with serious crotch rot. Seriously, bung mings.

I managed to stuff my stinky casing without mishap, however, and I was counting on a few hours of poaching to take care of the odor…when my bung gave up on me. I’d poked it in a number of spots to relieve pressure – not enough, apparently, because it flat out split down the middle, popping my emulsified sausage stuffing out into the poaching water. Thankfully, this happened at the end of the poaching process; I was able to fish my cooked sausage filling out and store it, bung-less and swaddled in plastic wrap.

Don’t worry, though, I’ll be back to bung: I’ve got a hankering to make capicola, and guess what the requisite casing is? Yep, you got it…

Anyway, because of the Charcutepalooza Ruhls, this will be yet another no-recipe post (sorry, guys!)…so let’s bring on the photos! 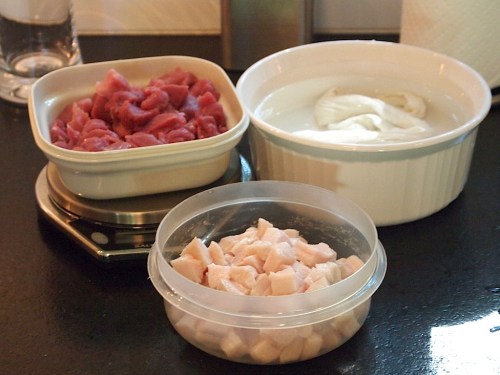 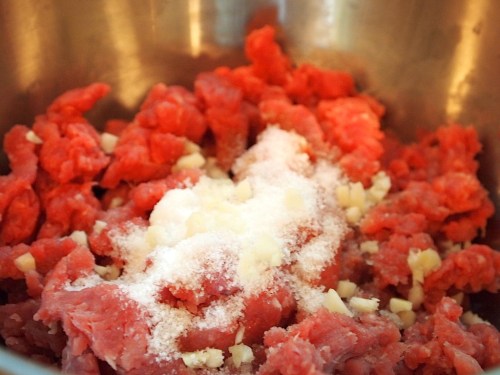 Got some pink curing salt in there for color. And, of course, plenty of garlic. 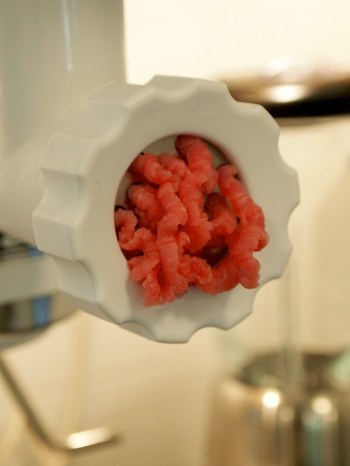 I assiduously trimmed my pork of fat and sinew, and it went right through the grinder. 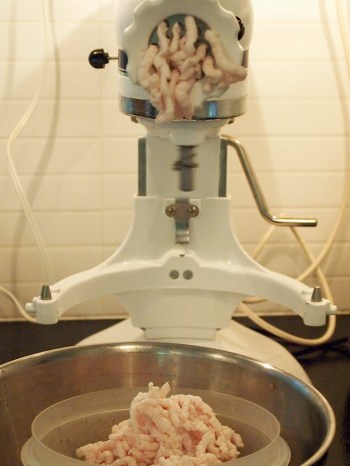 The fatback gets ground separately from the pork shoulder 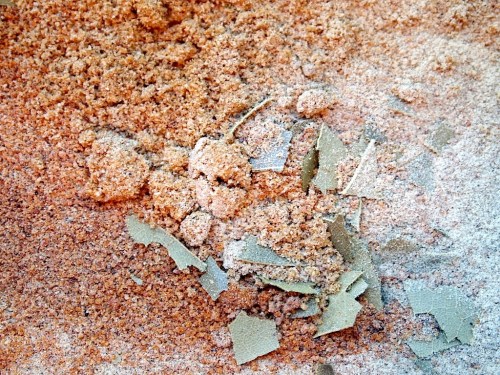 This mortadella is seasoned with white pepper, mace, coriander, bay leaves, and nutmeg. 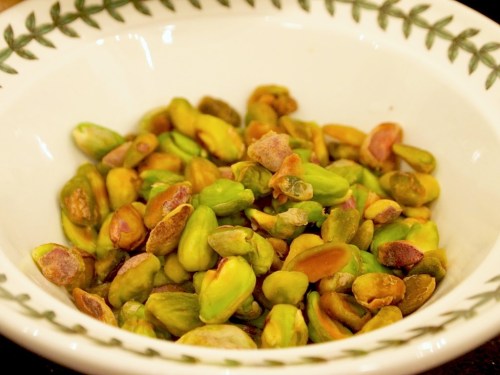 Pistachios give this sausage a distinctive look. 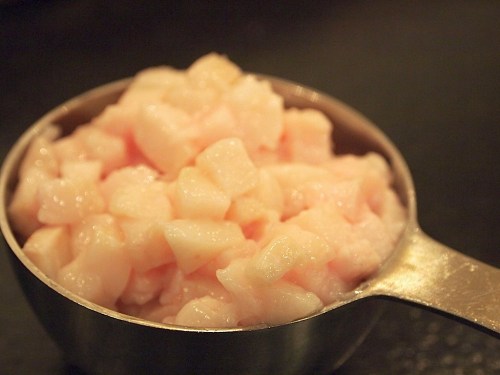 The other peculiarity of mortadella? It's studded with chunks of poached fatback, as well as pistachios. 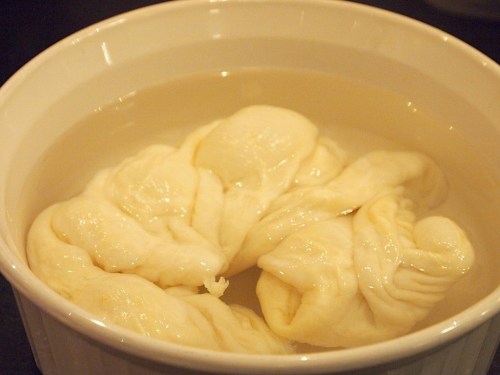 The hated bung, soaking. It was still just as funky after an hour in water. 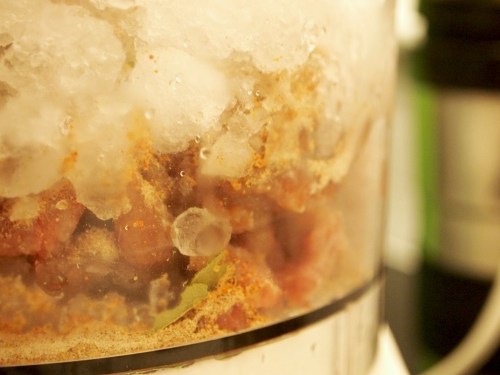 Temperature is key for emulsified sauage; ice is ground into the mortadella mix to get it to bind properly. 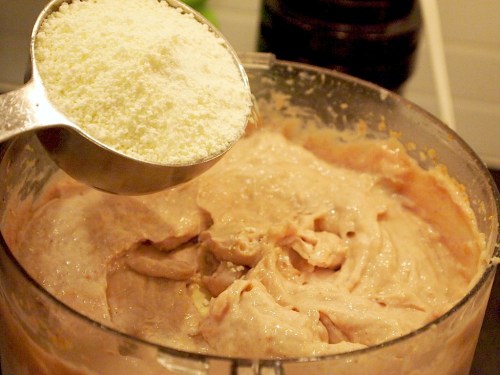 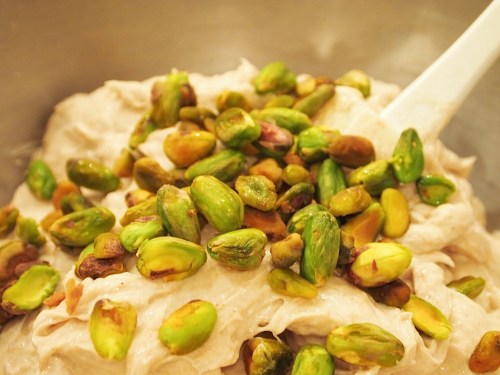 The pistachios get folded in at the end - look at that gorgeous mousse-like texture! 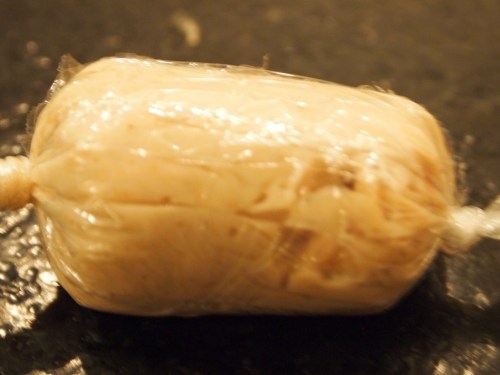 I did a quenelle test on a bit of the filling, rolling it in plastic wrap and poaching. 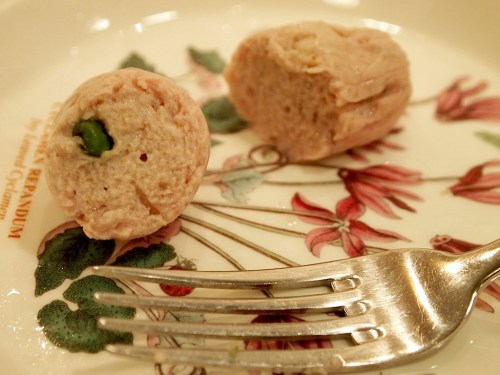 The result? Sausage looking good, on to the next step! 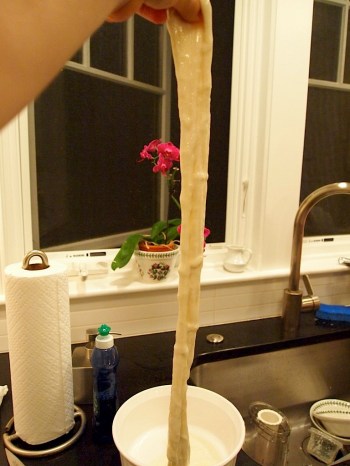 Sadly, the next step was bung time. 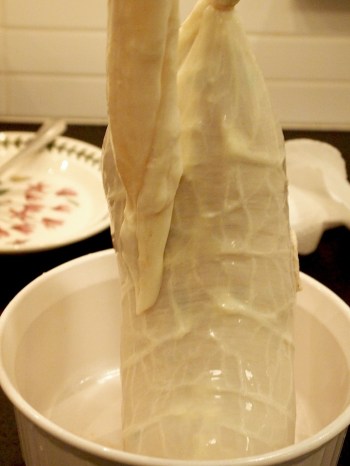 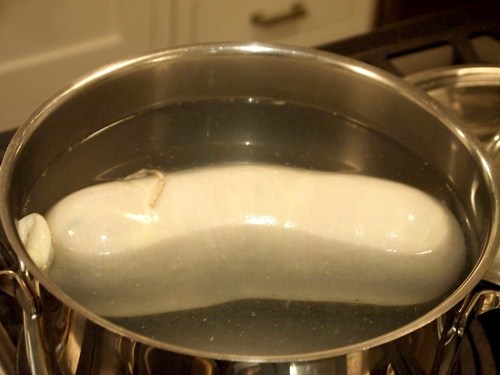 Got things stuffed up and poaching, though - and, despite the bung popping, wound up with the delicious sausage at the top of the page!