Guys, I made another wedding cake! After starting out with a cute, retro 3-tier for Susan in April…for the next wedding I baked for, over Memorial Day, things got a little crazy. My dear friend Gabe and his bride Catherine were looking for creative “cakeitecture” – well, they got this: 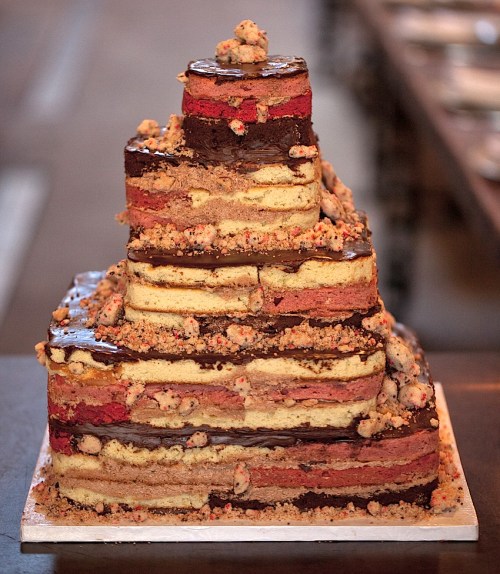 So, how did I go from Point A to Point B[ananas]? Well, the “cakeitecture” journey began back in college (many moons ago). Gabe was an architecture major; back then, I was just a compulsive baker – it would be many years before I started writing about my efforts and photographing the products. At this point, I have to mention that the photo above is NOT one of mine – it was taken by Rima Campbell, who did an amazing job capturing Catherine and Gabe and their wedding. I was so vamished when I went over to put the cake together at the venue (Brooklyn Winery) that I completely forgot to bring my camera, so I am very grateful that Rima sent her images over. 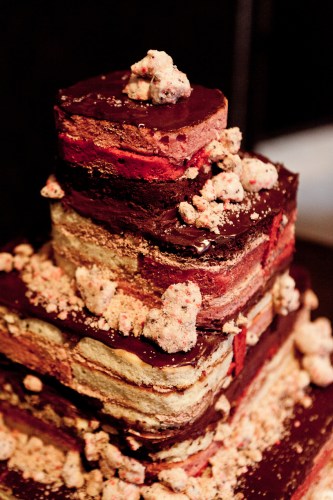 The reason I was less composed than I might have been: cakeitecture presents a whole host of logistical issues. As I started to explain above, the name “cakeitecture” was concocted in college. By senior year, I was regularly using our shitty dorm kitchen (and my own springform pans) to make crazy birthday cakes for our group of friends. Gabe and I got to talking, and decided it would be an amazing idea to take it to the next level and make straight-up abstract cake sculpture. Our alma mater had a very healthily endowed arts fund which it tended to distribute very generously to aid student arts projects, so we applied for several hundred dollars to make cakeitecture a reality. Sadly, one of the only limits places on these distributions was a “no food” rule; we stated in our application that food would be our medium, but were still denied. How unjust – perhaps this was the root of my decision to become a lawyer.

Fast forward a few years – Gabe leaves architecture for interactive street/online gaming and social media, gets together with Catherine, an amazing girl with similar interests, they start a business together called Woodcut Maps making beautiful, custom wood-inlay maps, and they get engaged. 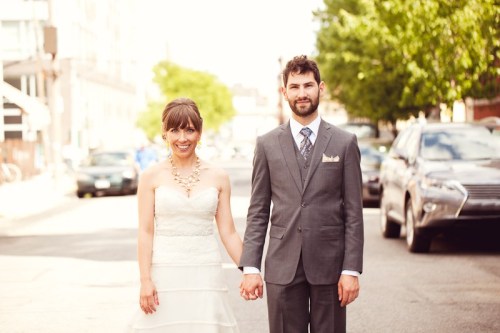 I was thrilled and excited when Gabe asked me to “make cakeitecture” for their wedding…and then I immediately started having a meltdown. While I bake a lot, my purely creative side seems to have atrophied a bit in my time as a lawyer. I wanted to make something really fun, off-beat, and fantastic for this couple, and I was having a lot of trouble focusing my vision, aside from a vague idea of having off-set square tiers. I turned to Gabe and Catherine to see if they had anything particular in mind, and Gabe sent me images from a couple of their favorite architects: Hundterwasser… 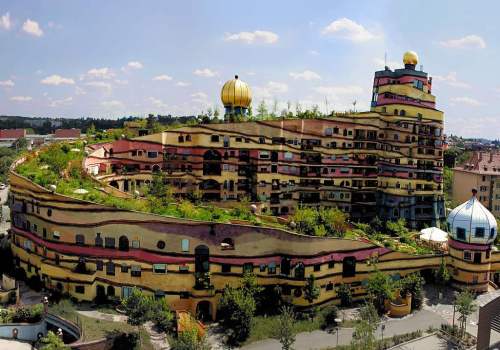 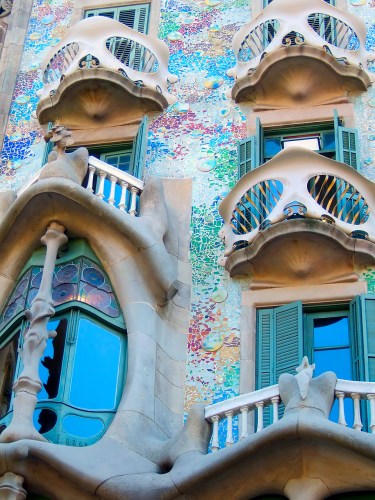 I started out thinking “FULL COLOR” – which led me to Google funfetti cake, and then led me to this “naked” cake from Momofuku: 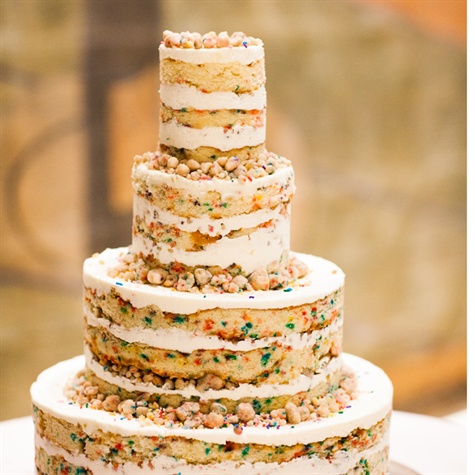 Somehow, I got completely stuck on the idea of having naked, colored cakes in several flavors and hues, and putting these together in a way that evoked Hundterwasser’s layering and Gaudi’s playful mosaics. Gabe and Catherine didn’t want the cake to be too unnaturally colored, so I decided to go with vanilla, chocolate, and various raspberry-flavored shades of pink and red. Their chuppah was going to incorporate a lot of earth tones, including brown and brick red, so this scheme would fit well.

Logically, the next step in any cake for Gabe and Catherine was to start mocking it up in a CAD model:

This was my very first CAD model, made with freeware (SketchUp), but it let me start thinking about how the rotation of cake colors and off-set layers would work together, and I got SUPER excited to start baking.

What happened when I actually put flour to butter and got things going? When that’s when things went straight up Gaudi-shaped…