As I mentioned in my last post, I’m single this Valentine’s Day.  I do, however, have a new relationship.  With meat, and the curing thereof.  Right now, I’m have serious and committed ties (for a week at least) to several pounds of beef rapidly on their way to becoming biltong – a kind of South African beef jerky. 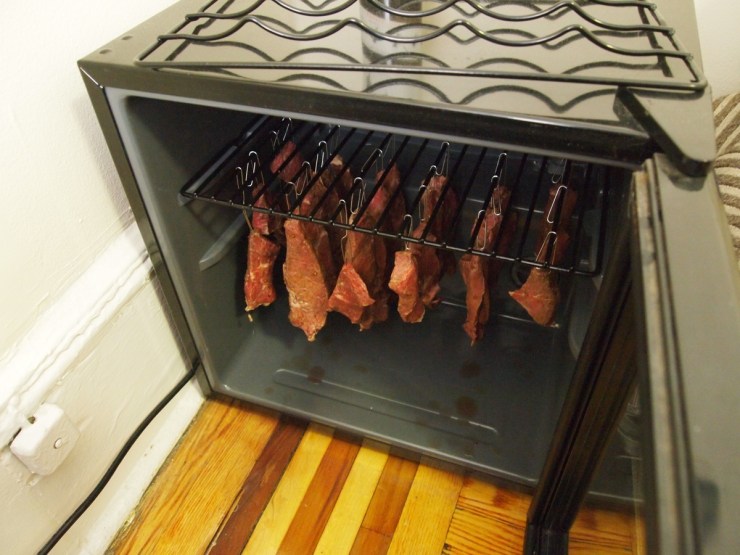 You can see from my blog recipe index that my natural inclination is to bake more than to cook: I just don’t have the feeling for doneness in a pan-seared steak that I do for cakes, or for seasoning.  When I came across Charcutepalooza, the meat curing challenge started by Mrs. Wheelbarrow and the Yummy Mummy, I decided to take it as an opportunity to get to know meat better.  I have now successfully made bacon (full post coming tomorrow), and unsuccessfully attempted duck breast prosciutto.  The duck breast went awry at some weird temperature fluctuations in my house, so I started looking around for a small wine fridge for climate control – and found one on eBay for $15!  Amazing!  My fridge and I are now on a curing binge.  The first non-Charcutepalooza cure: South African biltong.

Biltong is not imported to the U.S., so if you want it here you have to cure it yourself.  My stepmom is South African, and I’d heard for several years from my stepsisters about the amazingness of biltong.  It’s just beef jerky, I thought to myself.  Then I went to South Africa this summer with my family and discovered there’s nothing “just” about this jerky – it’s more tender, spicier, and more complex than American jerky.  Unlike American jerky, which is made from very thin strips of meat, biltong is cured in thicker pieces; it also uses a vinegar-salt cure.

I started my biltong project here by cross-referencing the beef jerky instructions in Michael Ruhlman’s Charcuterie with a couple of internet explanations of the process (here and here).  One can apparently use any number of cuts for biltong.  I’m curing 3 lbs. of top round (London broil): here it is, cut into strips about 3/4″ by 1 1/2.” The meat should be cut with the grain; I’ll probably use flank steak in the future, as it has a more uniform grain than top round. 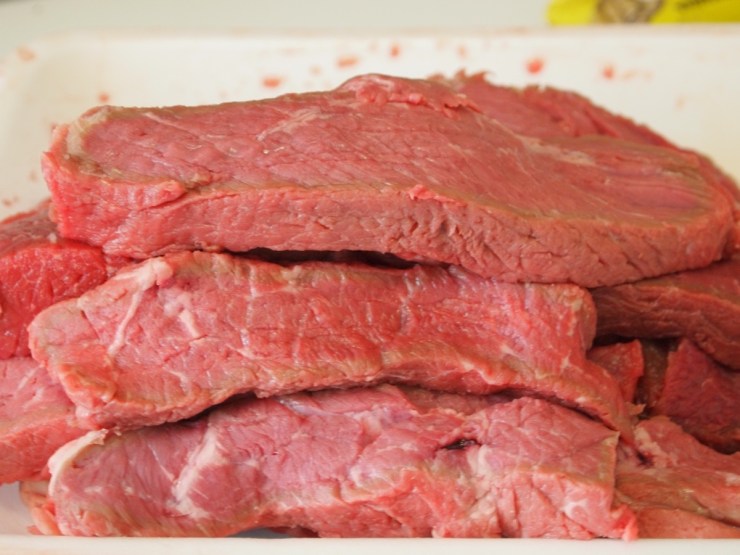 I toasted 1/2 c. whole coriander in a nonstick skillet, then put it in a Ziploc bag and crushed it with a rolling pin.  In wide shallow bowl, I mixed the coriander with 1 1/2 tbsp. salt, 1/4 c. brown sugar, and some ground pepper.  I dipped the pieces of meat lightly in a bowl of cider vinegar: 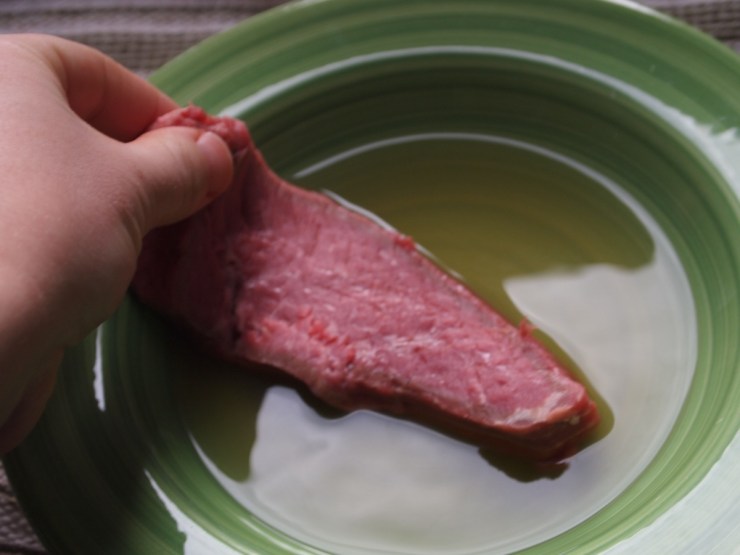 Then coated each piece with the spice mix: 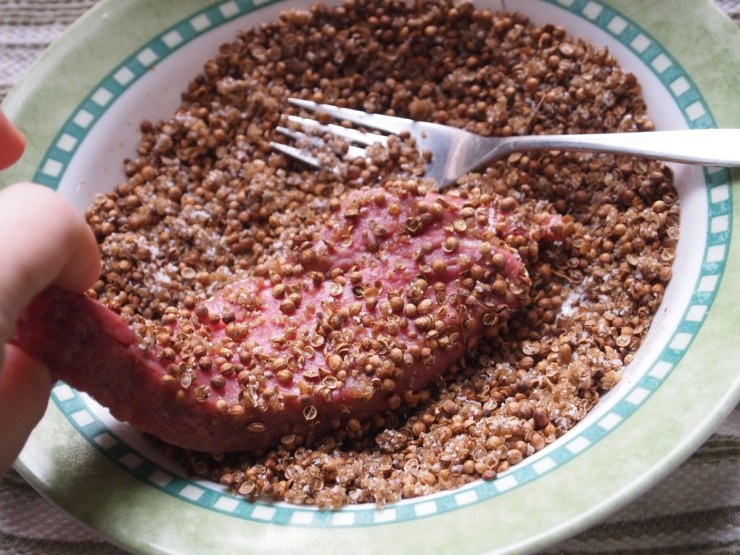 And placed all the pieces in a Corningware; it’s important to use a non-reactive bowl for a salt cure.  I let the meat sit for 12 hours, then poured off some of the blood and turned it over, and let it sit overnight for another 12 hours. 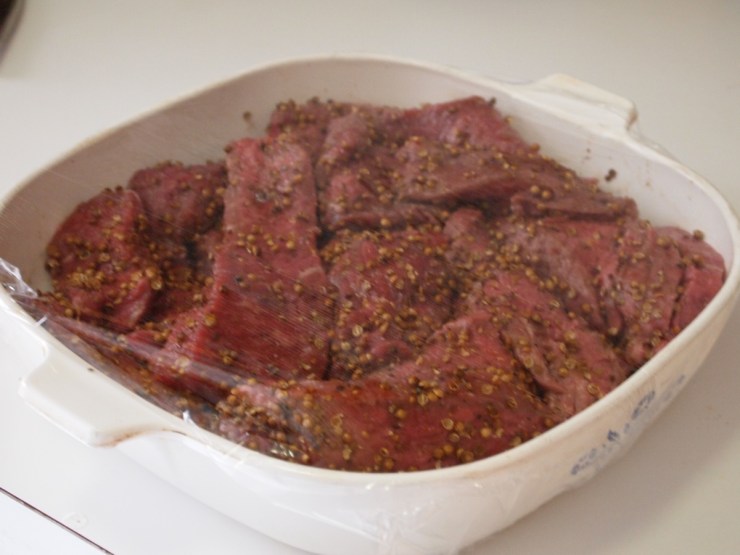 This morning I rinsed the cure off the meat, took a bunch of paper clips, threaded them through the thinnest end of my beef strips, and hung it all up in my wine fridge.  Check back in a week or so to see how it turns out!  In the meantime, to set the South African scene, here’s an amazing picture my dad took of rhinos fighting: 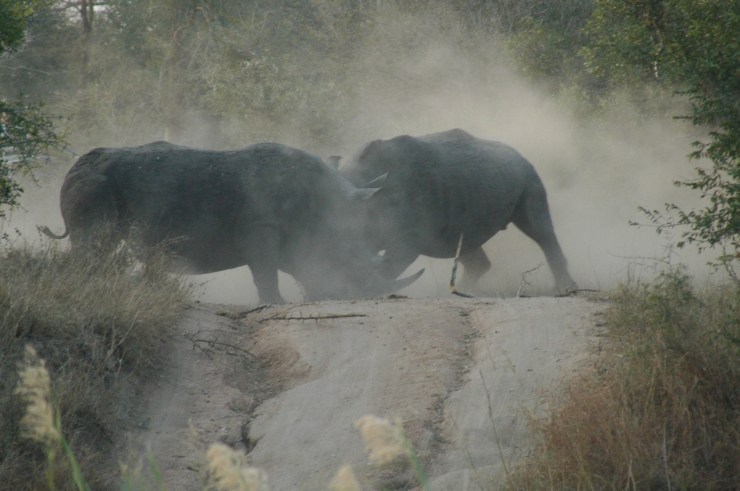 Hopefully that’s what people will be doing over this biltong…