I first had haggis about ten years ago, when visiting my great aunt and cousins in Yorkshire and Scotland; I had not had it since…until yesterday. My introduction to haggis was a positive one, and I resolved on my return from that trip to find some in the States to accompany the scotch I brought back with me. Turns out, however, that haggis is not easy to come by in America. In the intervening decade, however, my meat skills have improved and internet food lore has blossomed and so, for the 254th birthday of the poet Robert Burns, I managed to make all my haggis dreams come true. 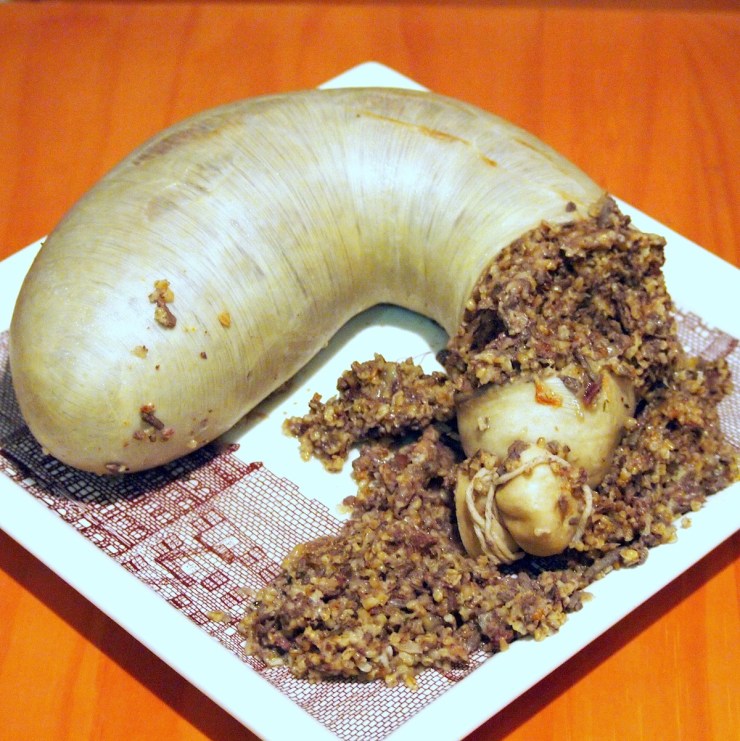 First, a bit of background: it is a longstanding Scottish tradition to serve a haggis on Burns’ birthday, and to recite his poem “Address to a Haggis” as a toast. I’m not that into Romantic poetry, but I’m always up for a party with whiskey and offal. So, I decided to have a Burns Supper. The 25th of January fell on a Friday this year, so my birthday party was a little belated. I needed the extra time, though, to get my haggis together.

For those of you who don’t know, a haggis is traditionally made from the pluck and paunch of a sheep. Translation: mutton heart, lungs, and liver are stuffed into a sheep stomach. One of the volumes in my collection (A Taste of History: 10,000 of Food in Britain, from the British Museum Press) tells me scholars believe the dish originated in prehistory, when hunters would pack the brains and entrails of a kill into the animal’s stomach and cook it over an open fire. Mrs. Beeton has a recipe for the dish; her instructions are a little spotty, though, so I took extra guidance from Tim Hayward’s illustrated haggis article at The Guardian.

The first, and most difficult, step in my haggis journey: finding sheep organs. I thought about going to a Greek or halal butcher in Queens, but in the interests of meat quality and time saving, I decided to look into farmers market butchers. Thankfully, 3-Corner Field Farm, which has a stand Saturdays at the Union Square Greenmarket, agreed to supply me with liver and heart. Sadly, it turned out that consumption of sheep stomach and lung is illegal in New York. I found another intrepid haggis-maker who’d used beef tripe as a lung substitute (for spongy texture) and decided to go this route. 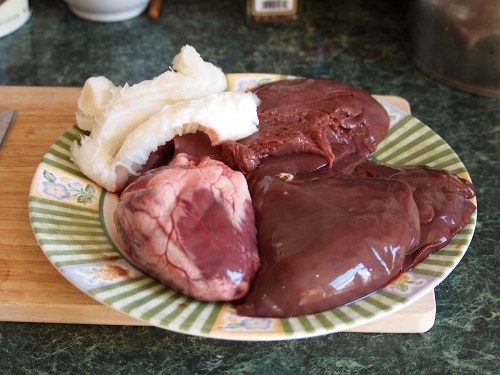 The Guardian calls for boiling the offal the night before and letting it sit in its broth overnight. I didn’t have time to buy tripe until Saturday morning, so I decided to trust in Mrs. Beeton and do my boiling morning-of. I cooled the pot in the fridge and was ready to go by early afternoon. 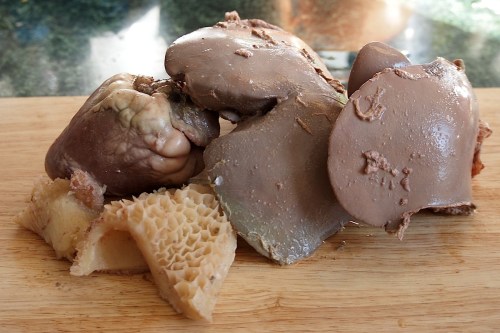 “Going” in this case involved organ grinding. OK, food processing. I pulsed the tripe and heart and, according to Tim Hayward’s recommendation, I grated the liver – also in the processor. I imagine this process was a lot more difficult back in the day. 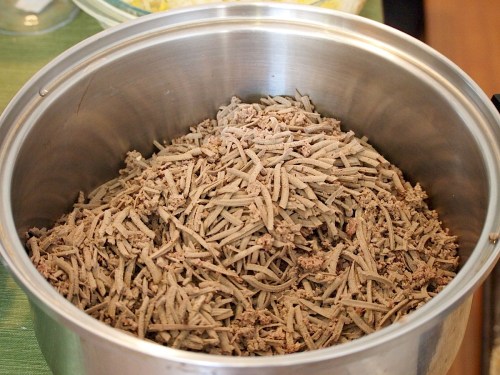 Grated liver, by the way, is…a little weird. I moved on, though, and while I was toasting Irish oats for the haggis I also used the processor to grate onions. Mrs. Beeton calls for nutmeg to flavor the haggis, and Tim Hayward used thyme, sage, and rosemary. I decided to go the hybrid route: nutmeg, thyme, and rosemary. And some good plain salt and pepper. 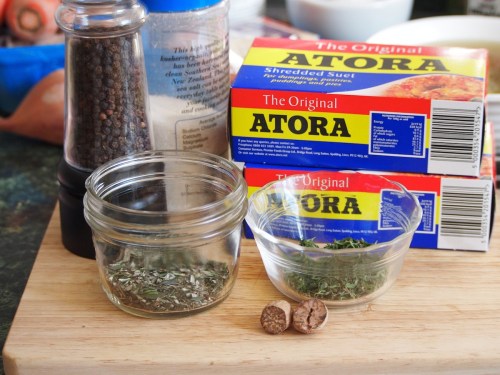 The last secret ingredient is beef suet. I had to order this from England: Chowhound’s NYC boards failed me. If anyone has a local source, please help me out. Anyway, the mix looked pretty much…like dogfood. 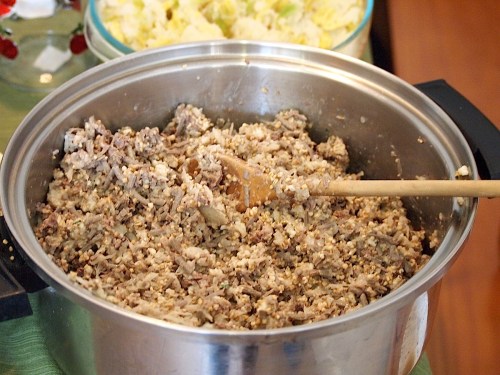 New York, as I mentioned, has outlawed sale of sheep stomach. Since I’m now pretty intimately familiar with it from my assorted charcuterie efforts, I immediately thought of using beef bung. Tim Hayward, it turns out, had the same idea. 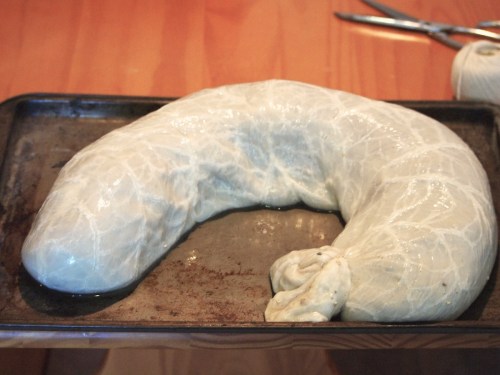 This stuffed haggis might not look as plump and lovely as some sausages I’ve posted here – but as you saw above, it cooks up quite nicely. I left it half-empty to start, because it expands as the oatmeal in the filling cooks and absorbs juices.

And while it was cooking, I whipped up a few classic accompaniments: oatcakes… 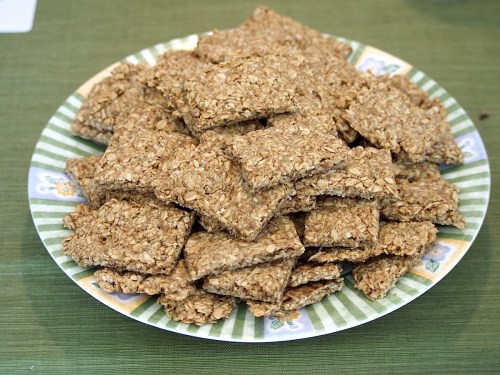 …and some awesomely-named rumbledethumps (mashed turnips and potatoes with cabbage and cheddar). 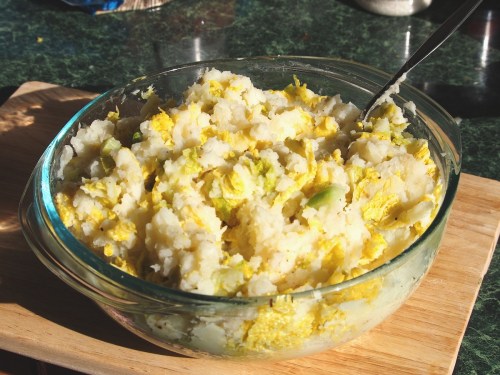 For whiskey, I put out Oban and Laphroaig – one easy, one peaty. Both went over well, and both paired beautifully with haggis. I got a surprising number of people to try haggis (the whiskey may have given courage to some), and it went over very well. Haggis, for all its fearsome reputation, is quite a mild-flavored dish: the liver dominates, the spices bring its earthiness out nicely, and the oatmeal gives it great texture. It’s a bit late now for a Burns Supper – but if you feel moved to make haggis for any reason (and you should), here’s one way to go about it.

1. Bring a large pot of water to a boil. Add the liver, heart, and tripe, and simmer for 90 minutes. Remove from heat and cool in the refrigerator for about 3 hours.
2. While the offal is cooling, soak the beef bung in cold water for at least 60 minutes.
3. Reserve 2 cups of the cooled cooking liquid from the offal, and drain the rest off. Chop the heart and tripe into sections about 2 inches across, and pulse in a food processor until both reach a consistency similar to oatmeal. The meat should have texture – it should not be smooth like pate. Place the chopped meat in a large bowl.
4. Using a food processor grater attachment (or a hand grater), grate the liver and add it to the other offal.
5. Chop the onions finely using a knife, or grate them with a food processor grater attachment if you have one. Add the onions to the offal mixture.
6. Spread the oatmeal on a baking sheet and toast it in 350-degree oven for 5 minutes. Add the oatmeal to the already-mixed ingredients.
7. Add the spices and suet to the offal, onions, and oatmeal, and mix well.
8. Bring a very large pot of water to a boil.
9. Drain the bung and pat it dry, and begin stuffing it using your hands. Push the stuffing down to the bottom of the casing and pack it tight enough to push out air bubbles – but don’t force it. Fill the casing halfway. Press the air out of the empty half and tie it shut using butcher’s string. Then push the filling up into the empty half, so it is evenly distributed along the length of the casing.
10. Gently lower the haggis into the boiling water. Immediately puncture it in about a dozen places, using a skewer or the tip of a narrow-bladed knife.
11. Reduce to a simmer, and cook for 2 hours. Drain the cooked haggis and let it stand for about