Well, looks like it’s another baking post. I’ve been meaning to work on some non-dessert courses soon, but when I’m stressed (as I am during finals), baking is just all I want to do. This particular recipe is another non-vintage one: it’s actually a modified Baked recipe, tweaked to accommodate the massive amounts of baharat I have hanging around.

My love for the Rosemary Apricot Squares from Baked is well documented, and I’ve been meaning to make them for a while. I’ve also been thinking about ways to change up the recipe flavors and use spices other than rosemary (if you want the classic rosemary version check out this great post). I remembered this afternoon that dried fruit (including apricots) is often featured in Middle Eastern cooking, so to celebrate finishing finals I decided to see how Baharat Apricot Bars worked out…Here they are! 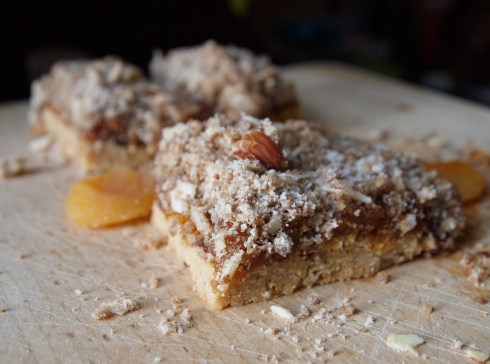 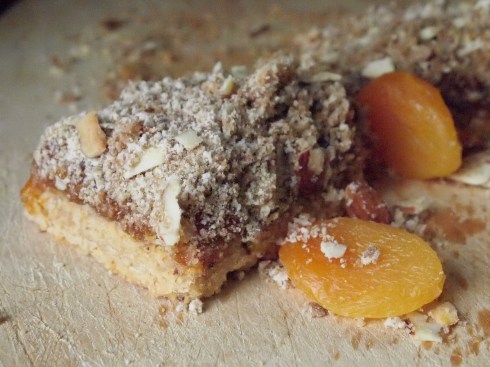 1. Combine apricot ingredients in a pot with water (1 1/2 c. if your apricots are very dry, 3/4-1 c. if they’re the moister vacuum-packed kind) and simmer for 40-50 minutes, until liquid is evaporated or very syrupy.
(NOTE: Watch your apricots carefully in the last stages of cooking.  I wandered off in my post-final-exam daze and started watching a very mesmerizing episode of What Not To Wear, and my apricots got a little too syrupy: they started to get some serious caramelization going.  This tasted fine with the baharat, which is intensely flavorful, but would totally kill this recipe if you used rosemary.)
2. While the apricots are cooking, spray a 9-inch square baking pan with nonstick spray and line it with parchment paper.
3. Whisk flour, salt, and your spice of choice together in a medium bowl. In a stand mixer fitted with paddle attachment, blend butter, vanilla, and confectioner’s sugar until fluffy. Put the mixer on its lowest speed and add the flour mix in a gradual trickle.
4. Pat the resulting dough into the prepared pan. Place the pan in the fridge for at least 30 minutes and preheat the oven to 350 degrees in the meantime. Bake the crust 25 to 30 minutes, until golden, rotating the pan halfway through. Cool on a rack and leave the oven on.
5. The apricot syrup should be done by down; puree it until smooth and let cool.
6. Combine all the topping ingredients except the butter in the bowl of a mixer and blend for about 15 seconds with the paddle attachment. Now add the butter and blend for about 1 minute, until the mixture is crumbly.
7. Spread the apricot filling over the shortbread, then sprinkle the crumb topping over it. Bake for 20-25 minutes, until the crumb gets a little brown (and the nuts are nice and toasty!). Let cool for 30 minutes, then lift out using the edges of the parchment and cut into squares. Enjoy!

**I’ve included the original recipe’s indications as well, so you can make Rosemary Apricot OR Spicy Apricot Squares!